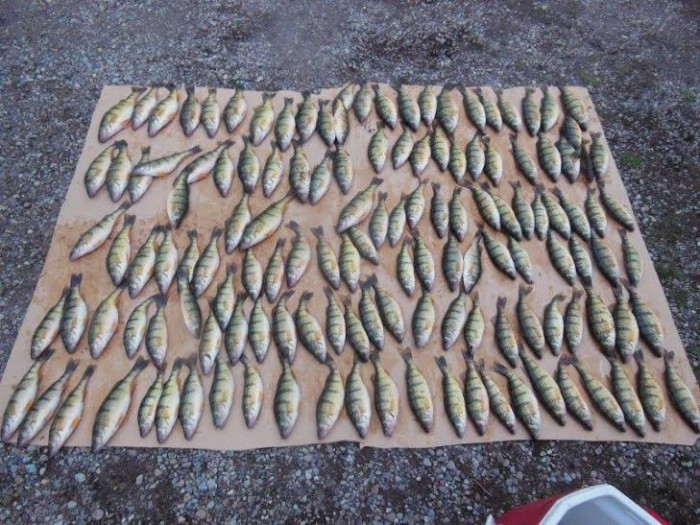 Fishing Report by the Macman from 3.12.2016
By angelamontana

March 12, 2016
Fishermen:
As of this report Spring Mack Days is one week away beginning Friday March
18th.  Because spring has come early this year another opportunity presents
itself if your find a day when the lake trout aren’t uncooperative.

For the last three years, probably due mainly to a decrease in lake trout
numbers the yellow perch fishing in Polson Bay has gone from excellent to
incredible.  Yesterday, March 11th, Roger Smart and I took advantage of a
calm warm spring day along with 5 other boat loads of fishermen with
incredible fishing results.  As water temperatures rose to near 45 degrees
the perch began to feed in a frenzy.  To have 10 to 20 big perch chasing
your bait at eh same time is an awesome sight that I never tire of.  For the
most part we used perch flies baited with night crawlers, not because other
baits wouldn’t have worked as well but because we wanted something that was
convenient and fast.

By 3:00 p.m. I had a full 52 quart cooler and Roger had a full 5 gallon
bucket.  There wasn’t a boat around us that wasn’t having similar results.
The picture that I took to help whet your appetite for a day of fishing on
the East side of Polson Bay (East Bay) is of only half of our total catch.

Let me give you a three year over view of the progress the perch have made.
Two years ago there were probably close to 20,000 perch harvested in the bay
in the normal early April to early May bite.  As water temperature warms,
which happens rapidly in that shallow water, the large fish become less
active until the large fish there become near dormant in the summer heat.
There normally is a short window of opportunity in June when cool water from
a rising lake again create some fishing opportunity.

At this point the perch fishing shifts to the west side of Polson Bay.
Let me continue with a three year progression of perch fishing.  Last year
judging from the increased number of boats and the continued fantastic
fishing I estimate near to 50,000 perch were harvested.  Then to top the
summer season off the perch fishing around the Polson area on the west side
of Polson Bay near the river outlet was the best I’ve ever known.  Just the
fishermen with me caught at least 1000 perch plus numerous limits of small
mouth bass. The three different times this winter fishing through the ice I
filled a 5 gallon bucket.  Like fishing in an aquarium I could selectively
choose which fish I’d let take the bait.

Now with the advent of the 2016 spring perch season my partner and I kept
over 200 perch to start the thing off.  Because it started three weeks early
I estimate that somewhere between 60,000 and 100,000 could be harvested.
If you are interested in great catches for the family and a perch fry for
the whole neighborhood watch the weather reports for a decent day and head
out to East Bay.

There is one added aggravation that I hope is eliminated as soon as
possible.  Because the norm is for smaller fish, mostly males, to begin
biting toward the end of the spring season and the larger fish to become
less active, some fishermen came to the false conclusion that it was because
the larger fish had been all caught by earlier fishermen.  The Fish and Game
accepted their complaints and conclusions and made a law that you are
supposed to keep only 10 fish over 10 inches.  Here again an unnecessary
tension is created between the authorities and the sportsmen.  With
thousands of fish involved at best it is going to be cumbersome to enforce
and cause ill will.  Their best avenue, in my opinion, would be to admit
their oversight and leave a world class fishing event alone.

For more information or comments call us at 406-675-0068, my personal cell
is 406-250-0241, or email us at macman@ronan.net  for our product line go
to: www. zimmertackle.com We have been honored to serve this community of
the Flathead Lake for 32 years.  We have become a fully stocked fishing
tackle shop with the focus on trolling and jigging the Flathead and local
rivers, streams and reservoirs.  Our faithful customers includes all major
sporting goods stores in the surrounding area and now online buyers have
gotten wind of our jigs and the further we have shipped thus far is
California.  I will tell you a great story about how we received an order
from California.  Some fishermen were deep sea diving and found an old boat
that had sunk.  It was there they found LEADAGATORS.  They used them and got
excited for its success in the California waters.  They searched for 3
years! For our Leadagators and happened upon our site by mistake.  As a
result they gave us a generous order and have become great customers.  The
good Lord has a great way of getting sales for us!!!

We had a great ice fishing season with new lures that Zimmer is dreaming up
every year.  I’m heading to Polson Bay and Pier 93 today with the perch
flies you will need for this immediate fishing flurry.  Among all of our
customers we thank you especially Snappys Sports Senter in Kalispell and Bob
Wards in Missoula.  You have been with us from the very beginning and we
appreciate your faithfulness and generous orders.  We have too many faithful
local customers to count or list but we thank you so much for your
friendship and your faithfulness to a small, local shop that majors in
Fishing Tackle. Tell us if you are looking for a lure (we sell all brands of
lures and jigs, downriggers, augers etc.) and we will find it for you or
faint trying!