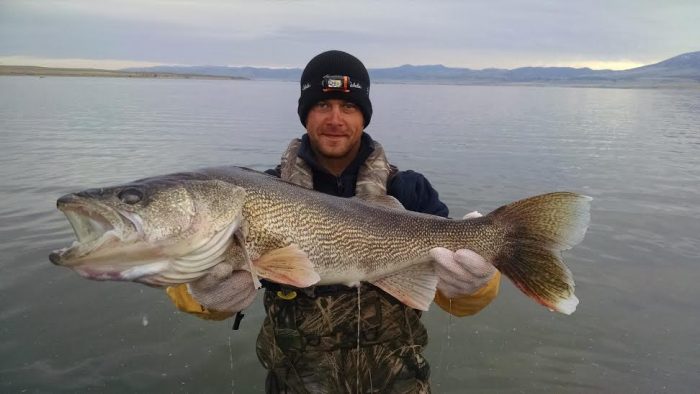 The 2016 Canyon Ferry Reservoir walleye spawning survey on the south end of the reservoir is officially over.  Survey results indicate that the peak of the spawn may have occurred before FWP staff launched their first trap on April 4th.  Seventy four total walleye were sampled from April 4th to April 25th and  the majority of the walleye were captured this spring between April 4th and 11th. Captured walleye averaged 13.7-inches and 0.9-pounds.  Eleven percent of the captured walleye were females and ripe females were only captured during the first 7 days of the survey.  Optimal walleye spawning temperatures (48-52 degrees F) were reached on multiple occasions during the survey, but FWP staff was starting to see fewer total fish toward mid-April.  When traps start to capture primarily immature males it typically indicates that the spawning period is ending.  Again, survey results indicate that the spawn may have occurred up to a month earlier than normal.

FWP staff also continues to monitor walleye in the Missouri River upstream of Canyon Ferry Reservoir via electrofishing.  Weekly electrofishing surveys have resulted in capturing 84 walleye that averaged 17.2-inches and 1.51-pounds.  Eleven percent of the walleye surveyed in the river were females.  Walleye started moving into the river in early April and have only  been surveyed thus far between Crimson Bluffs and the river delta.  However, the majority of the walleye surveyed this spring in the river have been between the HWY 12 Bridge and Cottonwood Boat Ramp on the Canyon Ferry Wildlife Management Area.

Please contact me if you have any questions about either of the surveys or if you happen to catch a tagged fish.  Tag returns from anglers are one of the most valuable fisheries management tools that FWP has, so get out there and catch some fish!