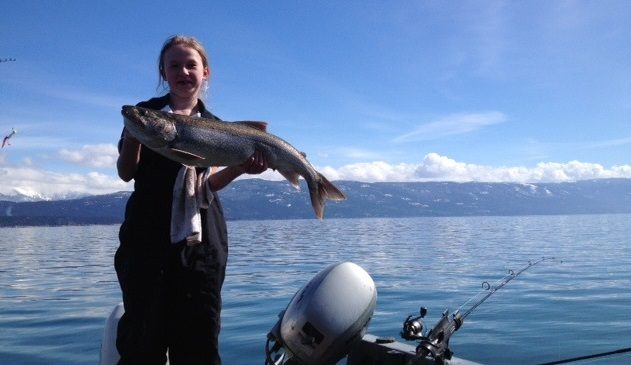 Mack Days anglers have turned in a total of 5,572 lake trout entries in the 2016 Fall Fishing Event sponsored by the Confederated Salish and Kootenai Tribes and sanctioned by Montana Fish, Wildlife, and Parks. The event offers UP TO $150,000 in CASH and Prizes to lake trout anglers. Anglers can win by being one of the top ten anglers-fishing at least 15 or more days in the event and having a good 15 day average. Top ten anglers are placed by their best 15 day average or they can win with tickets in the lottery drawing-one ticket for each lake trout entry. Fishing one day and turning in at least one ticket gets an angler entered. The lottery drawing starts at $1,000-and goes to $500. There are twenty seven winning tickets drawn. There are prizes for largest, smallest, ladies, youth (2 categories), 70 & Over, weekend prizes, captain’s prizes-for more information go to www.mackdays.com. Anglers turned in 580 lake trout on Friday, 557 for Saturday, and 162 on a rough, windy, rainy, blistery Sunday.

Florence angler Larry Karper is in first in the 70 & Over category with 190, 2nd place Glenn Hoffman of Missoula with 95, Leonard Lewis of Missoula-81, Bob Christensen of Missoula-64, and Jerry Luderman of Kalispell with 20.

Laurie Kreis of Huson has 68 for first in the ladies category. Brandy Hilde of Whitefish is second with 58, 3rd-Julie Vacca of Missoula with 40, Gina Schiff of Whitefish has 24, and Deb Amdahl of Kalispell and Donna McPearson of Silverdale, Washington are tied with 20.

Tyler Varga in the 13-19 category has 50 and Dalton Kluesner of Frenchtown has one entry in the 12 & under group.

Winning $200 and the first of the three bucket days was the team of Richard and Laurie Kreis and Jon Thornberg with a bucket weight of 24.6 pounds, second was Roger Schiff and Jerry Luderman with a weight of 19.6, and third place was Monte and Donna McPhearson with 19.15 pounds. Second Bucket Day will be Saturday October 22nd and the third day will be  Sunday November 6th.

Tim Vacca and Randy Collins have turned in a small lake trout that both measured 196mm (7 ¾”), and Terry Krogstad has a lake trout that measures 176mm or (6 7/8”). Two winners in the smallest lake trout category will win $250.

There is no large lake trout entry so far in the event. The largest has to be over 36” and over 24 lbs. to qualify.

Entries continue to be taken until the last day of the event. There is no entry fee. The Confederated Salish and Kootenai Tribes has a special $13 yearly combined Fishing Use Permit for the south half of Flathead Lake available to anglers from any area.