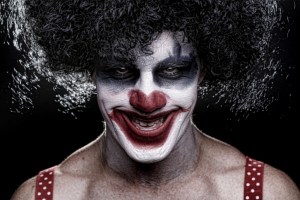 I have spent lots of time in a tree this fall. Sitting in a tree stand, while bowhunting, can be one of the most zen-like experiences you can have. You are fully immersed in your prey’s habitat, with all the sounds of nature around you. That is until a killer clown turns the hunter into the hunted.

Draven Riffe, had an encounter with a clown that appears to have him visibly shaken. The internet has been flooded with hoax videos of clown encounters. According to Draven’s Facebook page, he swears that the encounter with a killer clown was quite real. So much so, that he remained in his tree stand until the police could escort him out of the woods.

We know there is a good chance this is as hoax. But, given the chance this really happened, we are sure Draven isn’t sleeping to well at night.