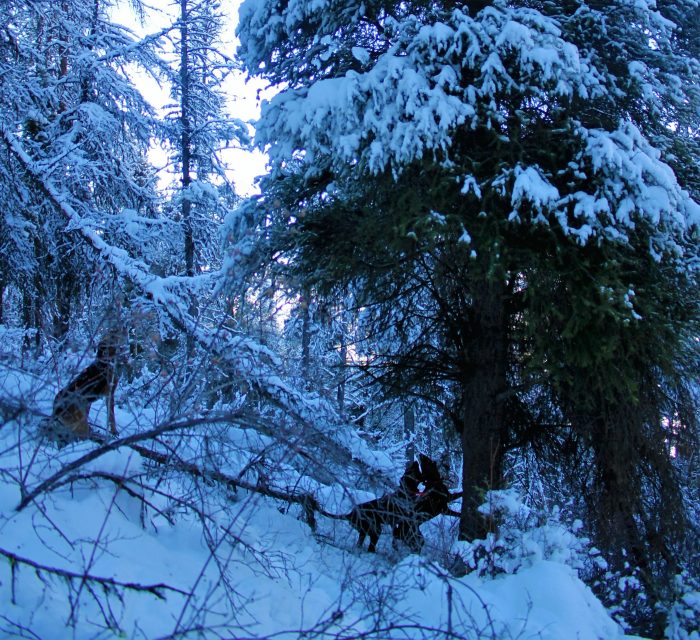 Their desire to hunt is awesome but they needed a little help from Huckleberry, a four year old female who’s owner proudly describes her as a blue walker hound.  She’s tough and gritty and falls somewhere between all business and bring it on. 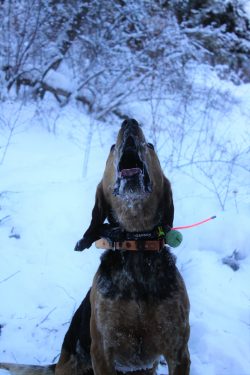 Huckleberry at a lion tree December 2016.

The two pups are mostly black and tan with a little walker thrown in for good measure.  I guess that makes them black and tan walker hounds or black walker for short.  Who knows? 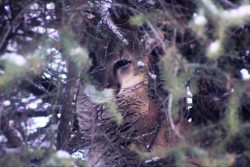 No matter what you call them they worked a track recently in Montana’s unit 270 all the way to a tree with a tom mountain lion hanging on its limbs like an ornament.

Action and Flora with the first lion they ever treed staring down at them in December 2016.

The pups were basically glued to the tree trying to climb it and chew it down while Ol’ Huck just sat there and tried to stare the cat out of the tree while bawling like she was fighting off a pack of wolves or two. 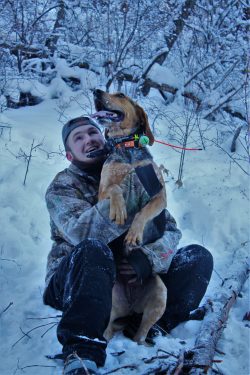 Wyatt Doyle with his hound Huckleberry at a lion tree in December 2016.

Huckleberry belongs to Wyatt Doyle and the pups are mine.  I’ve been working those hounds since they were 10 weeks old and seeing them at the tree doing just about everything right was one of the coolest experiences of my hunting life.

When Harry Marvin first found the lions track I asked Wyatt if he thought Huckleberry could tree that lion with my pups today.  His reply was something like

Wyatt had to play in an alumni basketball game later in the evening but he came along anyway just to stretch his legs before the game.

Thanks goes to Wyatt Doyle for running his awesome hound with mine and it was great to watch such a good hound work.