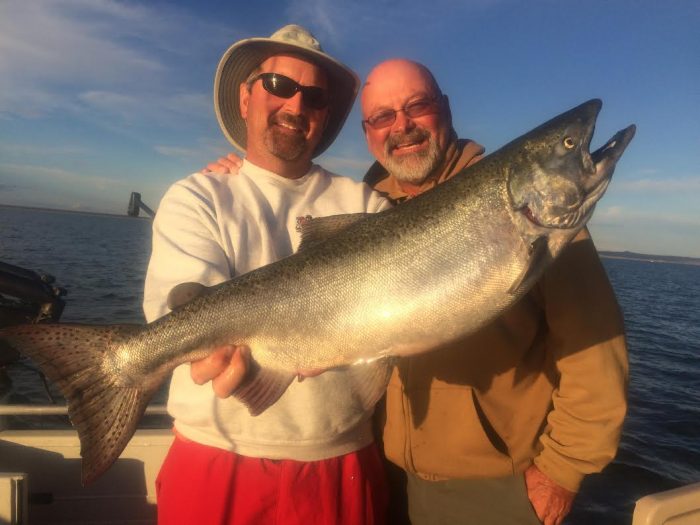 Last weekend I attended the Great Rockies Sport Show in Billings at the cities huge Metra complex. I was there promoting the Montana Outdoor Radio Show along with my girlfriend Berny Croy and my buddy Doug Stewart of Missoula. We are in our 19th year with the Montana Outdoor Radio Show and have attended every outdoor show in Billings since we went on the air 19 years ago. So you can imagine these shows are also a great way to catch up with fellow vendors and listeners of the show on what they have been up to in the last year. The fishing and hunting stories were flowing like spring run-off during the three day show.

More and more anglers are fishing Fort Peck Reservoir from the Billings area because of the great fishing that the 134 mile reservoir offers up. This year most of the talk was centered around the fantastic Chinook salmon fishing that anglers experienced on the lake. Walleye, northern pike, and smallmouth bass fishing took a back seat to talk about the salmon fishing mainly because it came on like gang busters last July and August. By all accounts the anglers I spoke with are hoping for another banner year for fishing on Fort Peck. The water level has remained stable which in turn has enabled the bait fish population to flourish and that of course has helped not only the Chinook salmon but the walleye, northern pike, smallmouth bass, and lake trout populations to grow in numbers and in size as they feed on the cisco as their primary bait population. The Fort Peck fish hatchery has also played a vital role in helping bring back the Chinook salmon population in the lake as they are unable to spawn naturally in Fort Peck. The salmon population relies 100% on the eggs that are collected and brought to the hatchery.

Brett French the Outdoor Editor of the Billings Gazette recently reported that improvements are being proposed for the hatchery to aid Fort Peck’s cold water fisheries, “After collecting a record number of eggs from spawning Chinook salmon in Fort Peck Reservoir this past fall, dirty water in the hatchery below the dam led to the loss of some of those fish. That’s one reason Fish, Wildlife and Parks is asking the Montana Legislature to endorse a bill that would provide a new water source for the hatchery as well as allow the facility to produce more coldwater fish. That’s a change from when the hatchery was first founded. Back in the 1990s FWP worked to limit the number of coldwater fish the hatchery could produce. Years later, things have changed and the facility is seen as a much-needed backup to aging hatchery facilities across the state”.

Last July and August some weekends saw as many as 50-70 boats trolling the face of the dam on Fort Peck on any given Saturday or Sunday. The anglers not only come from Montana to catch 20 pound salmon but from North Dakota, South Dakota, and Wyoming as well as from Canada. That means a healthy shot in the arm to the local economy in towns like Glasgow, Nashua, and Fort Peck. Nobody knows for sure if the Chinook salmon season will be as good as last year but one thing is for certain if it is the anglers will be trolling Fort Peck for a chance to reel them in.