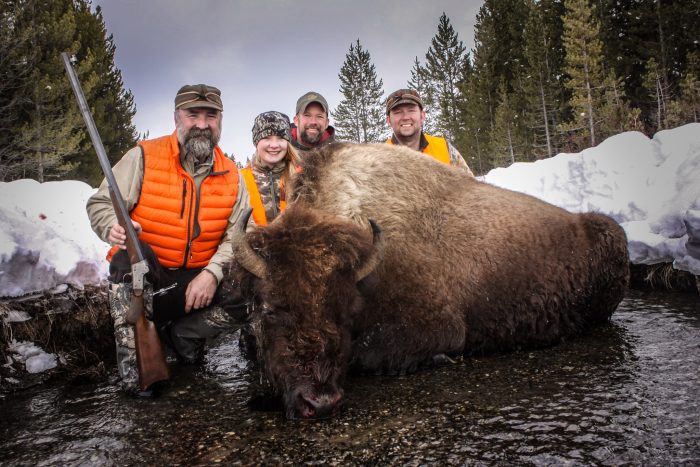 Drawing a covetted Bison permit amidst 11,000 other applicants isn’t a “gimme”, nor is bagging one once the permit is folded in neat squares and tucked inside a license holder.

Bison migrate out of Yellowstone National Park in winter to feed on brushy vegetation along the Madison River.  Despite their massive size Bison hide in dark timber and deep snow like snowshoe hares in a winter wonderland.

John MacGillivray, became a “Bitterrooter with a Bison Tag” this year and invited me along with his 13 year old daughter Addie for his hunt.  His friend Dan from Idaho met us there too.

The hunt for Bison turned up nothing after a full evening and morning hunt.  But an old Remington 45-70 Hepburn manufactured at a time when the last few bison remaining from the great herds still roamed the wild plains hung over John’s shoulder.  The original owners name was John MacGillivray too.  John bought the rifle around 1882. 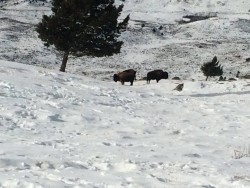 135 years later John MacGillivray’s Great Grandfather’s rifle reminded us that perseverance is the foundation of posterity when we spotted three lone bison feeding along the banks of the Madison River.  We pushed through hip high snow for two hundred yards to the trees where the small herd fed on willows.  The old Hepburn leveled off atop a pine branch.  The shooter’s nerves intensified.

A shot was taken.  Then another.  Hand loaded solids propelled by black powder flew into the biggest of the three. Deep snow slowed the hunters but so too the massive game we pursued.

The hunt took on an personality like the sturdy 45-70 pointed towards now moving bison.  For a moment the landscape trancended time and embraced the hunters in it’s rugged formations. The rifle belonged on this hunt equally now as it would have the first day it was purchased. Maybe more so now than ever.

Then there in a gravel bottom creek that feeds the Madison,  the hunt was over and the work began.  Four hunters stood over meat and hide with knives in hand as the 45-70 lay on the sleeves of a coat.

Cell phones, cameras and orange vests suddenly reminded me that it’s 2017 but I’m thankful to have heard the crack of a buffalo rifle and smell the burning powder as the waters of the Madison flowed past.

Some things never change and I’m thankful for that too.

Congratulations to John for a successful bison hunt. May the meat from this giant feed your family and friends for the next year! 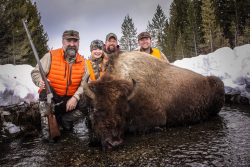