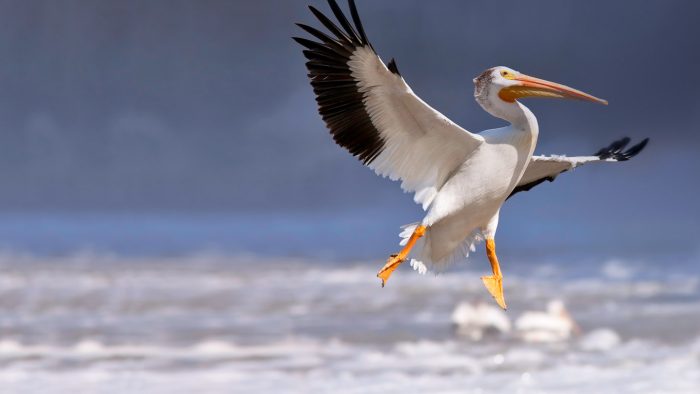 White Pelican Facts and Migration Info in Montana
By angelamontana

Every spring, thousands of white pelicans with wingspans of up to nine feet migrate from the Gulf of Mexico to two Montana locations.  That is quite the trek!  “Montana’s four breeding colonies are at Medicine Lake National Wildlife Refuge (NWR), Canyon Ferry Lake, Bowdoin NWR, and Eyraud (Arod) Lakes Waterfowl Production Area, northeast of Choteau. The total breeding population for the state stands at just under 13,000 birds. The Medicine Lake and Bowdoin colonies winter along the Gulf of Mexico, departing in stages during late October, while the two western colonies cross the Rocky Mountains to winter on the coast of southern California and western Mexico,” according to Dennis Joyes via FWP.

All colonies have some members that migrate both east and west of the Continental Divide, although the majority of the two western colonies in Montana (Arod Lakes and Canyon Ferry) migrate west across the Continental Divide to southern California and south into Mexico and Central America, whereas the majority of the two eastern colonies in Montana (Bowdoin and Medicine Lake) migrate south and east to the Gulf of Mexico coast and into eastern Mexico. Recoveries or resightings indicate many birds return in spring to their natal colonies to attempt breeding, but there are also a few cases of birds banded at their natal colony returning later to a different Montana colony. (via fieldguide.mt.gov)

The Montana Fieldguide website went on to state that one of the most significant factors in protecting breeding colonies in Montana is “maintaining water at appropriate levels to prevent mammalian predator access or flooding of nesting areas.”  Apparently, the pelican population in Montana significantly declined in the 1960’s and 1970’s due to water level fluctuations at their breeding colonies.  This is something that Montana pelicans are very sensitive to.

Here is the status of the white pelican breed in Montana, as of June 2015, conservation-wise, according to Dennis C. Joyes, of Toronto, Ontario:

Because of DDT and other environmental toxins, white pelican numbers declined severely in the mid-20th century. Environmental regulations have allowed populations to recover. Though pelican numbers in Montana are considered stable, populations require constant vigilance. Pelicans often abandon their nests and nesting colonies when disturbed by boats and low-flying aircraft. The birds are also susceptible to West Nile virus, which struck the Medicine Lake refuge in 2006-07 and killed nearly half the pelican chicks. More recently, oil contaminants have been detected in the tissues of Montana white pelicans that winter on the Gulf of Mexico, likely from the Deepwater Horizon oil spill of 2010.

Here are a few interesting facts on white pelicans:

And there ya have it.  If you end up seeing pelicans here in Montana, you can share your knowledge of these beautiful birds!