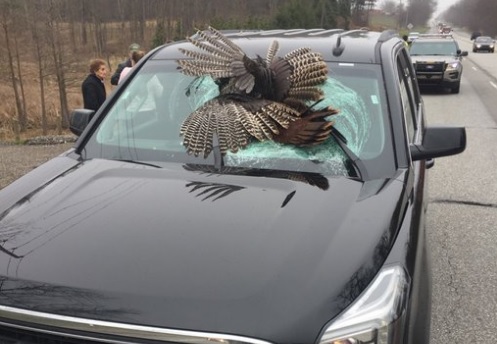 Turkey Collision That Could Have Been Worse…
By angelamontana

Sometimes, turkeys can end up in the strangest places, and John Tarabocchia, of Indiana, found that out the hard way at the end of March, according to Stan Maddux with Fox17.  He was driving down US20 from South Bend with three relatives just after celebrating a family member’s acceptance into the University of Notre Dame–and BAM! A 25-pound turkey slammed half way through his windshield.  It’s a good thing the bird only made it half way through, as there were no injuries.  Had it fully gone through, things could’ve turned out drastically different.

Bob Smigielski, 61, was onUS20 heading to Chicago and witnessed the collision but assumed the bird would bounce off the vehicle.  When he came back and turned around to check on the people in the vehicle, he was shocked that the bird even went partially through the windshield but was also shocked at the size of the bird.  He was relived to see there were no injuries, even though they were covered in glass.  Smigielski ended up receiving permission to take the turkey home where he planned to clean and cook it himself.

Officer Etchison said motor vehicles colliding into wild turkeys happens occasionally, but how this one ended was quite unusual.

”The wild turkeys around here, they’re usually a lot smaller., They’re not in the 25-pound variety. This is the largest I’ve seen actually getting hit by a vehicle. This is pretty incredible,” said Etchison.

So, be careful!  If this can happen in Indiana, this can happen anywhere.  If you see a bunch of turkeys on the side of the road, maybe consider decreasing your speed–better safe than sorry. 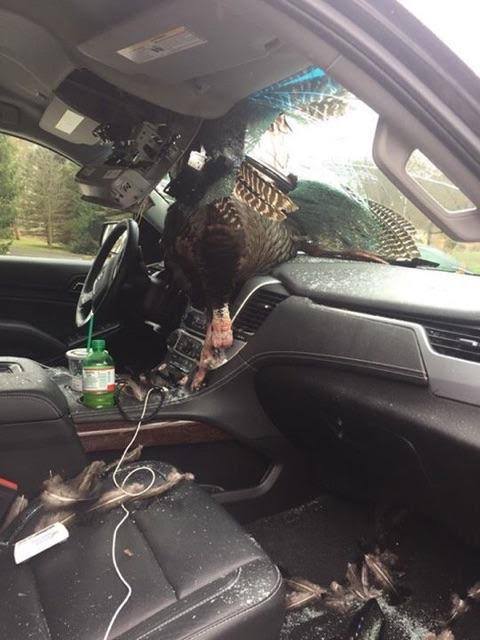