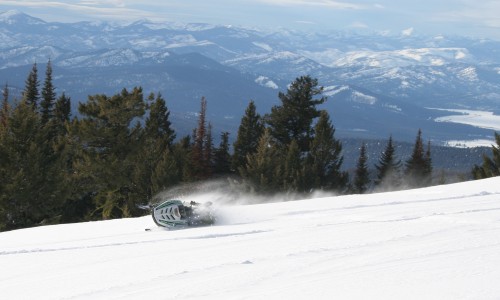 Montana’s Snowmobile Program as administered by Montana State Parks was established in the early 1970’s and is an essential component of both motorized and non-motorized winter recreational activities in the state. Montana’s groomed trails provide important access and recreation opportunities for snowmobilers and other winter recreation enthusiasts such as cross-country skiers, snowboarders, dog-sledders, and snowshoers. Montana State Parks provides funding annually to 25 local snowmobile Clubs who conduct the grooming throughout the state.

Montana’s Snowmobile Clubs groom over 4,000 miles of designated trails each season. The majority of designated trails are located on public lands, predominately U.S. Forest Service lands. Many of these trail systems are long-established and have been maintained since the early 1970’s. This maintenance and winter grooming is accomplished with funding appropriated by the Montana Legislature. The program is funded with a percentage of the state gas tax paid by snowmobile users, snowmobile permanent registration fees, a resident groomed snowmobile trail pass, and non-resident snowmobile temporary use permits. About $410,000 is available for the upcoming season.

The 2015-2016 winter season was the first for the newly implemented Montana resident trail pass. The first two seasons have been a success and with the revenues generated from the pass, Montana’s Snowmobile Program has been able to increase every snowmobile clubs grooming grants and rebuild the Beaverhead Snowmobile Club groomer in Polaris.

A list of the proposed 2016/2017 winter season snowmobile grooming grant applications is available at stateparks.mt.gov on the ‘Recreation’ page under Grant Programs. Public comments on the proposed disbursement of the Snowmobile Program grant funds will be accepted through Monday, August 14, 2017 at 5pm.

Or by email to: snowmobilegrants@mt.gov