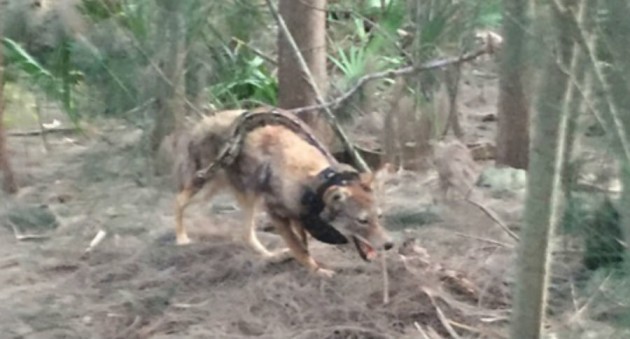 If you ever wondered which animal would win a struggle between a coyote and a python, well, in a particular case in Big Cypress National Preserve in Florida, the invasive snake was not the ultimate winner.  Pythons are invasive species in Florida and are becoming more and more of an issue in the state.  Apparently, it is not uncommon for pythons to be photographed with native wildlife in not-so-good situations and put out there on the world wide web.

According to Things Daily, the picture above was taken by Will James, of South Florida, at a rest area inside Big Cypress National Preserve. After hearing some “barking and snarling sounds he heard off the trail”, he investigated further to find this.

The obviously distressed coyote managed to escape the wrath of the snake, somehow with only a limp, as it ran away.  James took this picture before the coyote got the snake off of it.

Just another example of invasive species being destructive to native wildlife.  Montana has its own issues with wildlife management, but so do other states.  Don’t take it upon yourself to introduce non-native animals and fish anywhere–even if you don’t agree with your state’s fish and game department.