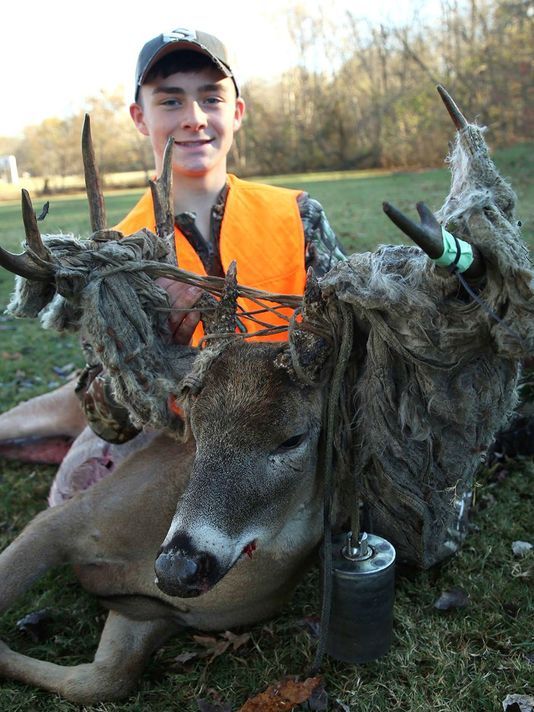 Teen Harvests Buck with Own Parachute and Flare Canister
By angelamontana

Here’s another unusual hunting story from the 2016 hunting season, reported by USA Today in November of 2016.  This is a reminder you should never go out hunting with expectations.  Expect the unexpected! 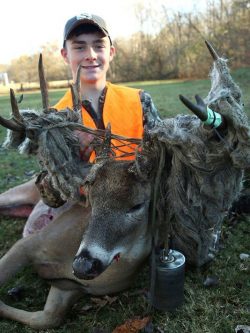 Brady Hempen, 15, has killed nearly 50 deer since he started hunting when he was just 5 years old, but never one like the buck he shot recently at Fort Campbell, Ky.   Hempen noticed the big deer earlier in the day with something he could not identify wrapped up in its antlers.

Part of what was in the rack shined. It helped Hempen to track the deer.

“At first I thought he had a dead deer in his antlers when I saw all that stuff in his rack,” said Hempen, who first spotted the buck from 50 yards. “It was pretty neat. I finally realized there was a shiny canister in there too.”

The deer had a parachute and canister from a military flare, which had been launched at the army base, tangled in his antlers.

Hempen, who is from Paducah, Ky., shot the deer from 25 yards using a muzzleloader during the Tennessee Wildlife Resources Agency youth hunt.

Hempen was only able to score 11 points in the rack. The parachute was covering some of the points.

Hempen decided not to remove the parachute and is having the head and rack mounted with it still in place.

“I think it just builds character on the hunt,” Hempen said. “The parachute was one of the main reasons why I shot him. I’d never seen anything like it. It was just neat.”

Hempen estimated the parachute had been tangled in the deer’s antlers for at least three months.

“There’s still velvet on the rack underneath the parachute where he couldn’t rub it off,” Hempen said. “That tells you it had to have been there since August or early September.”

The parachute did not appear to cause the deer any discomfort.