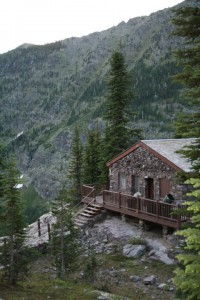 WEST GLACIER, MT – Stabilization efforts at Sperry Chalet have been completed for the winter. A crew of 10 flew up to the chalet on October 4. They braced walls, gables, windows, and chimneys. The chalet dormitory building was badly burned on August 31 during the Sprague Fire.

The intent of the stabilization is to protect the stone masonry walls from pressure exerted by heavy winter snow, as well as storm winds. The building lost its roof and floors in the fire which put the structure at increased risk of destabilization.

The stabilization recommendations for the necessary work were completed by engineering firm DCI+BCE led by engineer Tom Beaudette, P.E.

Crews faced cold weather, freezing rain, and snow, but were ultimately successful. They finished and flew off the mountain on October 16.

In general, preliminary assessments indicate that the majority of the stone masonry walls remain relatively intact. However, while working, stabilization crews noted that the walls appeared to have suffered more heat damage towards the roofline. It is also likely that one or more of the dormer windows may fail this winter, despite stabilization efforts, due to the level of existing damage.

In the spring, the park will assess how the structure weathered the winter, and will develop additional next steps.

Park Facility Operations Specialist John Lucke was at Sperry Chalet for the 12 day stabilization effort along with other crew members. He reflected “I am so pleased that the crew was able to complete the project despite 12 inches of snow and freezing rain, and particularly happy that we were able to do this with no injuries to anyone on the crew.” Crew members from both the east and west sides of the park joined together to get the job done. “I think it’s safe to say that the entire crew is glad to have been a part of protecting what is left of the structure, and would like to thank the Glacier Conservancy for that opportunity,” Lucke said.

In addition to snow at the work site, helicopter operations were also challenging due to unpredictable weather. The crew had originally been scheduled to go up to the chalet on October 2, but was delayed due to weather.

The trail to Sperry Chalet is currently closed and is impassable, as are other trails in the Sprague Fire area. Nearly 2,000 trees fell across trails as a result of the fire, and the park estimates that another 1,000 may come down across trails this winter. The standing hazard trees are considered very hazardous, and trail crews will begin work in the spring to address remaining hazards that have not fallen as a result of winter snow.

In addition to work at Sperry Chalet, the park is also beginning work along the Going-to- the-Sun Road and in the Lake McDonald Lodge area to reduce the potential for winter and spring flooding following the fire. Most work will occur in the Sprague and Snyder Creek drainages and will include cleaning out existing culverts, some creek rechanneling, and footbridge modification.