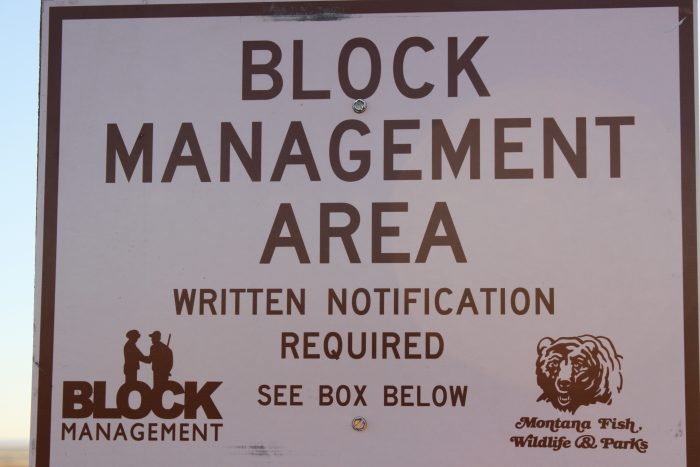 Despite chilly weather and icy conditions, more than 200 people attended the 2018 Block Management Cooperator Appreciation Dinner at the Town & Country Club in Miles City on Friday, February 2. Of those, 170 people were cooperators or families enrolled in the hunter access program administered by Montana Fish, Wildlife & Parks Region 7, and 36 were staff or special guests.

“It’s always great when we can get that many cooperators and landowners together at once for an evening of good conversation, great food and camaraderie,” said Region 7 Hunting Access Coordinator Travis Muscha. “It’s an enjoyable evening by all, and I am grateful that we as FWP can show our appreciation this way.”
Before the dinner, Muscha highlighted the 2017 Block Management Program across Montana. There were 1,324 cooperators enrolled, representing 849 Block Management Areas, allowing access to 7.3 million acres.

In southeastern Montana’s Region 7, 315 landowners participate in the program, with 257 BMAs spread over 2,179, 944 acres. Of that, 1,619,500 acres are private, and 560,444 acres are state and federal parcels. Over the past five years, enrollment in Region 7 has been steady, even though the total acreage has declined some. In 2017, five new cooperators enrolled, and four existing BMAs saw new cooperators. Fourteen cooperators did not re-enroll for 2017.
Of the cooperators who assessed the program, 100 percent were satisfied with the overall experience, and 98 percent had good contacts with hunters. Ninety percent plan to re-enroll, while 10 percent were still undecided. The positive outlook may have something to do with mule deer numbers, which are 47 percent above the 10-year long-term average. Post-season surveys from 2017-18 showed 46 bucks per 100 does and 77 fawns per 100 does.
The amount of hunter days (resident and nonresident) through Block Management has increased over the past five years, jumping from 61,960 in 2013 to 82,980 in 2016, and then dropping to 75,925 last year. There were 50,870 resident hunter days in 2017, and 25,055 nonresident hunter days.

Fewer hunters took the time to comment on their 2017 season, but of the nearly 3,000 who did, 77 percent observed game, 30 percent harvested game, and 92 percent were satisfied with their hunt. Waterfowl hunters had the best success rate, with 81 percent, followed by antelope at 35 percent. Deer and upland game bird hunters enjoyed 29 percent success, while 6 percent of elk hunters put one down.

Some legislative changes to Block Management raised the maximum landowner payment from $12,000 to $15,000 annually, and the impact payments from $11 to $13 per hunter day. Cooperators also may give preference on reservations to veterans on Veterans Day.

Re-enrollment for next season is expected to begin later this month and close in mid-July. Hunting reservations will begin on August 22.

Many cooperators were recognized with longevity awards for time enrolled in the program:

The Colstrip Sportsmen’s Club, a long-time advocate of the Block Management Program, also donated gifts to cooperators as a thank you for participating.

(This article credit goes to a Montana Fish Wildlife and Parks news release at fwp.mt.gov)