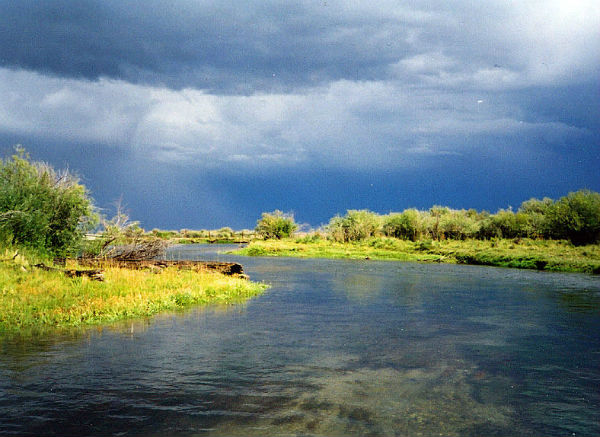 Flushing Flow Planned for the Beaverhead River
By angelamontana

Along with partners from the East Bench Joint Board and the U.S.
Bureau of Reclamation, Montana Fish, Wildlife and Parks will conduct a flushing flow out of
Clark Canyon Reservoir beginning Thursday, April 19 to help move potentially damaging
sediment deposited in the Beaverhead River by Clark Canyon Creek.
This action, agreed upon by the partners, is intended to improve river health and avoid events
like those of recent years in which large amounts of sediment were deposited into the
Beaverhead from Clark Canyon Creek resulting in severe declines in fish population. These
events randomly occur after large rain or snowstorms and coincide with low flow releases from
the Reservoir.
Given that this world-renowned trout fishery has seen trout numbers decline by 50-percent
following large sediment deposits like these, numerous groups of concerned citizens, anglers and
outfitters sought a solution to the problem.
After studies were conducted to determine the cause of these events and what it would take to
avoid the effects on the fish population, the partners decided to annually store 2,100 acre-feet of
water and conduct a flushing flow from the Reservoir to get the sediment moving.
The first flushing flow was released in 2017 and demonstrated effectiveness in clearing sediment
and improving river health.
River users should be aware that the flushing flow regime will be released April 19 through April
22. Beaverhead River discharges will increase from overwinter releases of 75 cubic feet per
second to 600 cubic feet per second on April 19 and will be maintained near that level until the
reservoir elevation is below 5546.1 feet and the flood pool is emptied.
The Beaverhead River supports 2,000 to 3,000 trout per mile in its upper reach. The river sees
about 40,000 angler days per year, and several million dollars are spent in the area to come and
enjoy the river.