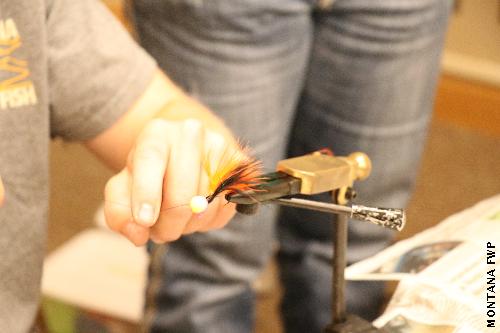 For the first time, Montana Fish, Wildlife & Parks Region 7 offered a Lure Making Class on July 19 at its headquarters in Miles City.

Almost 40 people attended and made a variety of lures, with the hope that their new-found talent will increase their odds of catching some nice fish this summer.

Participants could select an unfinished jig head from various sizes, then choose a powder paint color to dip it in and feathers to tie if off. The combinations were impressive, even for beginners.

Tate Langel, a traveling intern from FWP’s Montana Wild educational center in Helena, provided the instruction and all of the supplies at no cost. Langel, who offers lure making at fairs and other events, was pleased by the number of people who took part.

Participants learned how to heat the jig head with a heat gun, dip it into the powder, tap it, then quickly heat it again to form a pearly, smooth surface. If they desired, they could dip the jig head tip into a second color for a more interesting design. Crafters then put the lure on a vice grip and used a bobbin with waxed thread to wind around the hook end. They were shown how to trim feathers and attach them to the lure with more thread, finishing with a half-hitch knot.

The activity was very popular with youths, but entire families also took part. Several people made multiple lures and expressed an interest in pursuing the hobby.

Many of the those who showed up to make lures that day brought them to Spotted Eagle Lake that evening to test them out at an open fishing event also hosted by FWP. At least one group reported success, with a young lady catching a soft-shelled turtle that was all too happy to be released back into the lake.