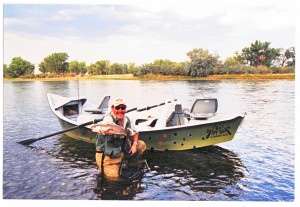 In west-central Montana, boaters must stop at any station they pass and also seek out an inspection (even if they don’t pass a station) if they are bringing a boat over the Continental Divide into western Montana; launching in the Flathead Basin if the watercraft last launched outside the basin; or if they are bringing a boat into Montana from out-of-state and preparing to launch it for the first time this season.

Boaters requiring an inspection can find several stations already in operation for the season in western Montana, and more will open by the end of May.  Open stations include one along Interstate 90 near Anaconda (west bound) that operates daily from 7 a.m.-8 p.m.; near the town of Ravalli on the southern end of the Flathead Basin, in operation from 7 a.m. to 7 p.m. daily through mid-May and then 24 hours a day; and at Clearwater Junction in the Blackfoot Valley.

Some inspection stations operate in partnership with the Blackfeet Nation, Confederated Salish and Kootenai Tribes and Missoula County Weed District.  To find a watercraft inspection station and to learn more, go toCleanDrainDryMT.com or call the FWP Aquatic Invasive Species Bureau at 406-444-2440.