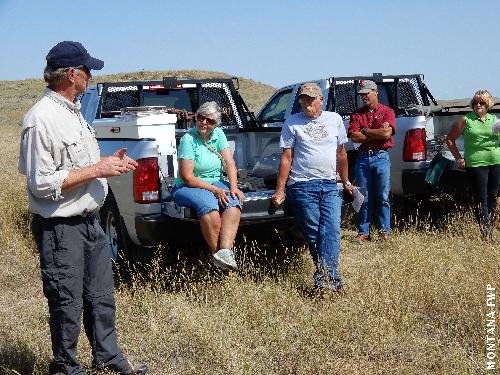 Montana Fish, Wildlife & Parks Region 7 invited its Citizens Advisory Council members and area legislators on a summer field trip Aug. 7 to visit the North Sunday Creek Conservation Easement just northwest of Miles City. The easement, which was created in 2018, allows public access to 14,300 acres of private land including key antelope and grouse habitat in Custer and Rosebud County. Access to this working ranch is administered through the Block Management Program.

What is a Conservation Easement?

A conservation easement is a partnership between a landowner and FWP in which a landowner maintains ownership but voluntarily transfers some development rights to FWP to achieve conservation benefits. Often the agreement maintains existing agricultural land use while protecting or enhancing wildlife habitat. Managed public access is also part of the agreement. Funding is mostly through hunting license sales, or FWP may partner with other groups or agencies to purchase easements. Once enacted, an easement is permanently attached to the property deed.

Conservation easements are just one of the tools FWP uses to help landowners work through challenges and find common goals, according to FWP Region 7 Supervisor Brad Schmitz.

He explained that with 75 percent of the region consisting of private land, “We don’t have a business if we don’t work with landowners.”

The first conservation easement in Region 7 was in the late 1980s. Today Region 7 has eight easements in place, with others in the works, and the agency has learned many lessons about what works and what doesn’t, Schmitz said.

The primary aim is to preserve a specific type of habitat or opportunity, he explained. Pointing to the prairie around him, he noted that intact habitats like long-grass prairies no longer exist in many western states.

“There’s a real value in preserving this,” he said.

Easements typically take a minimum of two years to work through the process, which Schmitz says is a good thing. It is a two-way street, and landowners need to understand the permanence and weigh all factors. A management plan addresses things like grazing systems and hunting access, with room for flexibility if needed, and proposals undergo a lot of review.

“The partnership doesn’t go away when the ink dries,” Schmitz said.

Many easements arise out of existing relationships with producers who may already participate in other FWP programs like Block Management or upland game bird food plots.

“These people have a conservation ethic and are conservation minded, and they want to maintain the nature of their property once they’re gone,” said FWP Region 7 Wildlife Manager John Ensign.

“We’ve never had more people coming to us and saying this is important to us,” he said. “The need is still out there, and the desire is there.”

Both Schmitz and Ensign acknowledge that easements are not for every landowner or situation, and people contemplating one should ask lots of questions.

Citizens Advisory Council Member George Luther, a land surveyor who has dealt with several easements, said there are pros and cons, and people should go in with their eyes open.

Issues at the Forefront

After touring the conservation easement, the group met at FWP’s Miles City office to discuss current topics in the agency.

After significant efforts in Regions 4, 5 and 6, it is Region 7’s turn this year to conduct sampling for Chronic Wasting Disease, according to Wildlife Manager John Ensign. CWD is a progressive, fatal disease affecting the central nervous system of deer, elk and moose. It is a slow-moving disease; however, left unmanaged, it could result in long-term population declines within affected herds.

The priority surveillance area will basically be the southern half of Hunting Districts 702, 704 and 705. During the general season, samples will be collected at check stations in Hysham, Ekalaka and Ashland, as well as at the Miles City office. FWP will pay for testing of animals harvested in priority areas; elsewhere, hunters must submit and pay for their own samples if they want their animal tested.

CWD has not been detected in Region 7 yet, but FWP is taking a “proactive and preemptive approach” by setting up a management zone in proximity to a CWD-positive result just south of the Montana border in Wyoming, Ensign explained. Hunters will not be allowed to take whole carcasses out of that zone to help prevent the spread of CWD, so they should be prepared to quarter out the meat for transport purposes. There have been no cases of transmission to humans, but the Centers for Disease Control recommends that people do not consume CWD-positive meat.

Region 7 will do extensive CWD outreach and education including open houses prior to the general season.

Schmitz said a legislative reduction this year in the amount of time wardens must spend on non-enforcement activities allowed them more flexibility with their time and budgets. Previously, each warden had to spend 640 hours per year on non-enforcement work so their budgets could tap into federal funds reserved for wildlife management. That was significantly cutting back on enforcement time and presence, so legislators tweaked that formula this session.

Schmitz said FWP has hired a new regional park manager to oversee Regions 7 and 5. Jamie Hould, who managed Region 7’s Fishing Access Site program and previously served in Parks, has been tapped for the post. Hould will be based in Miles City. Schmitz said eventually there will be a person hired for the Region 5 Billings parks post because of the vastness of the area Hould has to cover.

According to Warden Captain Jack Austin, it’s been an unusually busy year for black bears in Region 7, with wardens dealing with at least 15 bear situations. Unfortunately, five incidents have resulted in black bears being fatally shot by citizens. Of the other cases, one bear was relocated and another was hazed with rubber bullets.

“June and July was just bear central for us,” Austin said.

“I really can’t say what’s the trigger,” he said. “As it gets drier, we expect more, but we haven’t seen it yet – knock on wood.”

Region 7 has a fall bear quota of 8 and a spring bear quota of 4, and the spring quota is seldom met. The bear activity has created some opportunities for educating people to secure attractants to help prevent encounters, Austin said, and he hopes people will use tolerance and work with FWP to give the bears a chance to survive.

Fisheries Manager Mike Backes said construction of a bypass channel has begun at the Intake Diversion Dam near Glendive. The dam impacts upstream spawning runs of endangered pallid sturgeons and other native species, so the channel is designed to allow better passage. Backes said the massive project will span three years. An existing side channel is blocked during construction, so Backes said there could be some short, intense paddlefish seasons until the channel is completed. Fisheries crews also continue to track translocated pallid sturgeons as they continue to venture farther upstream in the Yellowstone and Powder rivers.

Backes also encouraged CAC members to share with their neighbors the option to have FWP stock prairie ponds. Backes said the process is simple, and anglers must ask permission each time to gain access.

Office Manager Erin O’Connor encouraged people to check their hunting licenses before they go out this fall. FWP has an ongoing problem with fading ink on printed licenses, making them barely legible. People can have their licenses reprinted for free at any FWP office.

Citizens Advisory Council Member Ed Bukoskey of Rosebud serves on groups that discuss brucellosis and Chronic Wasting Disease, and his concern is on educating people about the dangers of animals concentrating on private lands [which can increase the spread of disease]. He praised the state’s efforts on Aquatic Invasive Species, noting the wide network of inspection stations in place.

CAC’s Dale Kreiman of Lindsey said he’s seen a little improvement in upland game bird numbers but has not seen the explosion in deer numbers that others have observed.

Bob Hagedorn of Volborg asked if the three separate application dates for big game special drawings could be simplified so that hunters can track them better. Schmitz said that’s been a topic in an internal hunting regulations review, and some changes could be coming.

Rep. Geraldine Custer said she enjoyed the tour and would like to see more general education done on conservation easements. On another note, she saw a lot of fish and wildlife bills during the recent session, and she believes that some could be handled through rule making instead. FWP is just one of many parties proposing legislation.

Schmitz said FWP did not oppose or take a stance on many bills this session, and he saw a lot more cooperation and willingness to listen on both sides.

CAC’s George Luther of Miles City asked if Region 7 has any lands that could be impacted by the recent Herrera vs. Wyoming ruling before the Supreme Court. The court determined that, contrary to an earlier state court ruling, the Crow Tribe’s hunting rights under the 1868 Treaty did not expire when Wyoming became a state. Essentially, that treaty gave tribal members the right to hunt on “unoccupied lands of the United States.”

Schmitz said FWP has a meeting next week with legal counsel to address that question.

Plevna’s Gary Sparks said FWP did a good job of getting Baker Lake stocked after it was redone. He also praised Wildlife Biologist Melissa Foster’s efforts to trap swift foxes for research in the area.

Glenn Heitz of Terry said he’s seen limited deer but plentiful predators in Prairie County, but other than that it’s been a good year for wildlife. The Prairie County Sportsman Association received a lot of support in renewing a lease with the Bureau of Land Management for its rifle range, which is utilized by many local and visiting hunters.