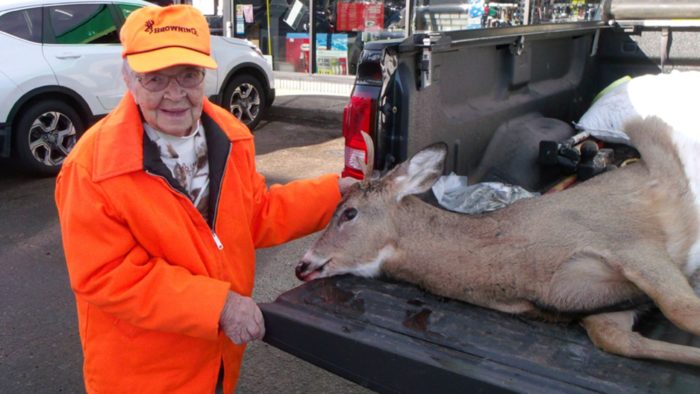 You’re never too old to cross a dream off your buck-et list, as evidenced by a 104-year-old woman in Wisconsin who shot a deer during her first-ever hunting trip.

Florence Teeters recently ventured out onto her land in the city of Phillips for the inaugural hunting excursion, and was thrilled to get lucky, the Wisconsin Department of Natural Resources (DNR) reports. The adventurous centenarian was inspired to go hunting after sitting in her son Bill Teeters’ blind last year during the open season, and deciding she wanted to join the fun.

“Yes, it was her idea to get the license. And, yes, that was her first license,” Bill, Florence’s fifth child, said.

fter the centenarian received her certificate earlier this week, the mother and son returned to the blind on the sunny opening day of 9-day gun deer season on the Teeters family land in Price County, per WDNR.

This time, however, Florence was ready to get her shot, and stylishly dressed for the occasion in a hunter-red plaid coat, WMTV reports.

“I had a nice chair for her and it was nice and warm. A little after 4 p.m., a buck shows up about 30 yards away,” Bill told the outlet. “I tapped her on the knee and I pointed. She nodded and smiled and was real quiet. Then she took the shot!”

Ecstatic, Florence screamed “I got a buck! I got a buck!” On her very first try, the elderly woman bagged a small “spike” buck with unbranched antlers, her son said.

Click here for the full story by Janine Puhak at FoxNews.com.