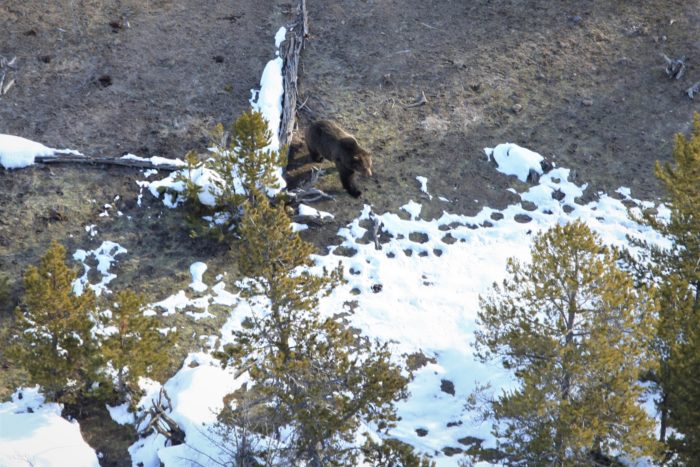 MAMMOTH HOT SPRINGS, WY – The first confirmed grizzly bear sighting in Yellowstone National Park of 2020 occurred on Saturday, March 7. The bear was observed from the air by biologists during a radio telemetry flight near Grand Prismatic Spring just one day before last year’s first sighting.

Male grizzlies come out of hibernation in early March. Females with cubs emerge in April and early May. When bears emerge from hibernation, they look for food and often feed on elk and bison that died over the winter. Sometimes, bears will react aggressively while feeding on carcasses.

“Now that bears are emerging from winter dens, visitors should be excited for the chance to view and photograph them, but they should also treat bears with respect and caution,” said Kerry Gunther, the park’s bear management biologist. “Many visitors think bears are ravenously hungry and more likely to attack people for food after emerging from hibernation, but almost all bear attacks result from surprise encounters when hikers startle bears at close distances and the bears react with defensive aggression. Hikers, skiers, and snowshoers should travel in groups of three or more, carry bear spray, and make noise.”

The park restricts certain visitor activities in locations where there is a high density of elk and bison carcasses and lots of bears. Restrictions will begin in some bear management areas on Tuesday, March 10.