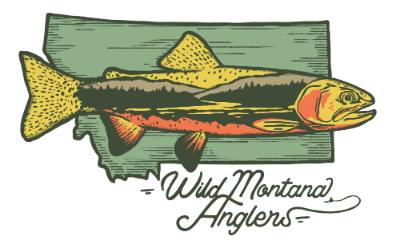 Spring appears to have sprung in the Flathead Valley and the fishing has been similar to the weather, HOT.

The big river and it’s tributaries have seen quite the turnaround this week. Water temps have risen into the mid 40’s with our warm and sunny days and it has made all the difference in the world. Bugs are popping, more fish have moved into the river system, and the trout are on the feed. Small dark stoneflies as well as the occasional mayfly and plenty of midges can be found throughout the forks and the mainstream of the Flathead River. Some trout are looking up and smashing dry flies and the rest are eating the nymph or streamer. Trout are starting to move out of the winter water with all this bug activity. You will still find trout in the inside corner, slower water but as the day heats up, we have found fish moving into faster water to take advantage of the hatching bugs in the riffles. Look for other types of water too. You might be surprised where you find trout hanging out.

Dries: It appears that our dry fly season has officially started! Try some flathead River standards on your next outing. Dry flies such as purple hazes, march browns, green or grey drakes, and goober midges have all been eaten by trout this week. Don’t be afraid to throw that big foam bug either. You might get the occasional trout to take a look and it will work great for suspending a nymph below.

Under the bobber:  “Keep them bright and hang em deep.” Bright colored attractors followed by a stonefly nymph or worm pattern should get some action if put where it needs to be. Other patterns to consider are copper johns, 20 inchers, pheasant tails, micro mays, and drake nymphs. Try dropping these patterns to about 2-3 feet and fish the transition zones in riffles, where the water gradually gets deeper. Think 2-4 feet of moving riffle water. If they aren’t in the shallower water extend that bobber up your leader and fish the slower deeper runs.

Streamers: The streamer game is strong! Stripping streamers from the boat has produced some good numbers and some pretty nice fish this week. A good set up for throwing streamers from a boat is a 9-ft 6 or 7 weight rod with a 250-350 grain sink tip. This set up allows you to throw bigger streamers or deal with gusty conditions if need be and get plenty deep in the transitional water where we have found a lot of fish this week. Darker and lighter colors have moved fish so go with whatever “floats your boat” in the color department.

The smaller water has been fishing pretty good as well. There have been a lot of bugs hatching lately and the trout have been eating a smorgasbord of patterns. The trout in these smaller waters also seems to be dispersing throughout the entire stream and have been caught in several types of water. I am seeing fish move into shallower, faster water in search of moving or hatching insects. The dry dropper rig is a great way to target trout in the faster, shallower water scenarios. You can find trout deep as well but you might have to get through a few whitefish before you find the trout.

Dries: Mayfly patterns have been the most productive dry flies this past week. Blue wing olive dries and cripples as well as various colors of your standard parachute Adams have been solid. Mayflies started popping off pretty good last week and the trout have finally started to key in on them but that might change in the near future. Larger, dark colored stoneflies have been making an appearance throughout the week and if they stick around the trout will start looking up for some large foam bugs. At least thats what I’m hoping will happen.

Under the bobber: Stonefly patterns are still working really well. Pat’s rubber legs in variegated black and brown has been great, as well as, twenty inchers tied on a jig head in traditional olive as well as purple. When there is a good blue wing olive hatch, it’s hard to beat a pheasant tail nymph, hare’s ear, or micro may when the fish are feeding.

Streamers: Find the deeper runs and outside bends to fish streamers.

Most Stillwater’s are in the ice to open water transition stage so it will be a little while longer until we can report on the stillwater fishing.