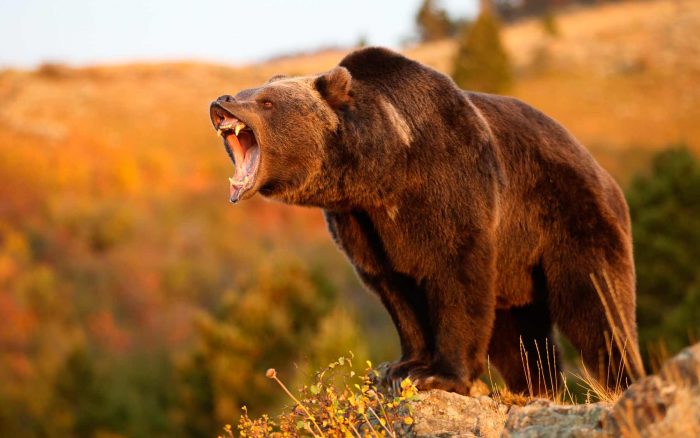 The Governor’s Grizzly Bear Advisory Council will meet through three video conferences that will be live streamed online for the public.

The citizen council will convene April 9, from 9 a.m. to noon; April 17, from 9 a.m. to noon; and April 24, from 1 to 4 p.m. The video conferences will be streamed at fwp.mt.gov/gbac. The council is scheduled to discuss the role of hunting, social tolerance and livestock and agricultural compensation in the upcoming meetings.

Information from past meetings, including presentations and reports shared with the council, is available online. The public is encouraged to provide input to council members online at fwp.mt.gov/gbac.

Meetings will be live streamed at fwp.mt.gov/gbac

The citizen council most recently convened in a condensed format with a video conference in March after a scheduled in-person meeting in Choteau was canceled due to COVID-19 concerns.

Over the last few months, the citizen council has reviewed the history of grizzly bear recovery and conservation in Montana, interagency management efforts, legal considerations, and grizzly bear distribution. Presentations have focused on the current state of grizzly bear populations across the state and the core questions and considerations that wildlife managers and others face as these populations continue to expand in Montana, including into some areas they have not occupied for decades. Members have heard from FWP management staff, as well as tribal and federal managers, who respond to conflicts and develop prevention measures. Non-profit organizations have also presented information on education and outreach efforts across the state.

Grizzly bears in Montana are native, iconic carnivores that have high value to people and cultures across the state and around the world and play important roles in Montana ecosystems and economies. At the same time, they can and do injure or kill people and livestock, and cause property damage and economic loss, which may disproportionately affect individuals living and working in bear country. Their potential presence is both valued and feared.

In the GYE and NCDE, densities of grizzly bears are increasing, and they are now expanding into areas where they haven’t been for decades, including connectivity areas between recovery zones. These areas include a greater percentage of working private lands and places where the human population is expanding, creating a greater potential for conflicts. Existing management plans and agency communications have built public expectations about where bears would occur and do not reflect recent changes to bear distribution.

Montana remains committed to maintaining the long-term viability of grizzly bears, consistent with FWP’s long history of wildlife conservation. The challenge is balancing conflicting values and addressing diverse needs, especially in newly recolonized areas. Federal protected status currently governs Montana’s ability to address distribution and abundance. However, many challenges will remain regardless of the status of federal protections.

Montana Gov. Steve Bullock appointed the council and tasked the diverse group with producing a final report with discrete, actionable recommendations that provide clear and meaningful guidance to the Governor’s Office, the Fish and Wildlife Commission, and other entities with responsibility for grizzly bear management and conservation in Montana.

For more information on the council, visit fwp.mt.gov/gbac.