BOZEMAN – Like many members of the Montana State University community Everett Coba is an avid skier. But Coba has taken his love for the backcountry one step further and turned it into an undergraduate research exploration.

Coba, a senior in the Department of Earth Sciences in MSU’s College of Letters and Science with a concentration in snow science, has spent winters working as a ski patrol member at Titus Ridge near Ketchum, Idaho. Doing the same this year presented the opportunity to apply a spatial science modeling system to the area that gauges avalanche danger and terrain difficulty based on a variety of factors.

“Everett is looking at the Avalanche Terrain Exposure Scale, or ATES model, which can be used to model avalanche runouts,” said Nick Fox, Coba’s adviser and a Geographic Information Systems specialist in the Department of Land Resources and Environmental Sciences in MSU’s College of Agriculture. “His goal was to validate it on the ground for this particular location. He’s trying to prove that model and see if it accurately rates this terrain that he knows well.”

Coba began by running the model remotely in Bozeman on a computer. The ATES model analyzes sets of data such as slope angle and shape, forest density and terrain traps such as gullies and cliffs. What the model ideally then produces is a map of the terrain based on a rating system of 1 (simple), 2 (challenging) or 3 (complex). 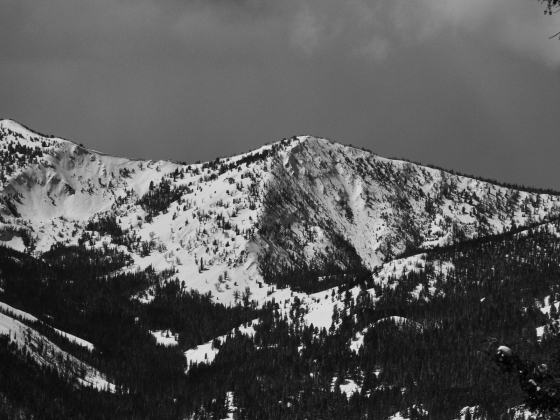 Titus Lake Peak, right, and Wolcher’s Bowl at Titus Ridge ski area in Idaho. Both are popular ski routes and feature the potential for avalanches. MSU student Everett Coba’s research uses a geographic model to rate varying terrain at Titus Ridge for avalanche danger based on a variety of factors. Photo courtesy of Ben Vandenbos.

“In backcountry skiing there’s a lot of unknowns due to variables we can’t control, like snowpack,” said Coba, a Seattle native. “It’s hard to have fun skiing a slope when you have uncertainties about those variables. The best way to stay safe is to be aware of the hazards by knowing the terrain you’re moving through. This ATES model is a way to distinguish avalanche terrain from non-avalanche terrain.”

Much of the challenge, said Fox, lay in simply getting the model to run correctly. Coba had to carefully curate those layers of geographic data, setting numeric thresholds to identify ratings for different routes and areas of Titus Ridge. Weather and land cover data were input along with data about the geographic features of the mountain, but as with many models, small mistakes could lead to a failed rendering.

Once Coba had the model running successfully, he moved into the second element of the project: comparing the ratings created by a computer to what he knew about the terrain firsthand, as well as the ski area’s own rating system. With his knowledge of the terrain at Titus Ridge, he had a fairly good idea of what the end result should look like. What he found was surprising.

“Things turned out well for the first two categories, simple and challenging,” said Coba. “But it didn’t want to show much complex terrain in there. It was misinterpreting some of the data as a forest, when really it was steep couloirs and geologic features. Some factors can’t necessarily be quantified in GIS.”

Adequate preparation by skiers is critical for backcountry safety, said Coba, but models like ATES can make that preparation easier and more effective for winter recreationists.

“It’s meant to help people who are unfamiliar with terrain make better decisions before they leave the house,” said Coba, noting that ATES is not designed for use as a navigation tool. “We open and close runs every day based on conditions, and models like this help potentially make those decisions on whether or not to close terrain easier.”

Jordy Hendrikx, director of the MSU Snow and Avalanche Lab and advisor for the snow science option, said he is glad to see undergraduate students working on projects like Coba’s, which merge theory and practice. That merger is a key theme in snow science, he said, and Coba’s project with ATES builds upon the work of previous MSU students, including one project that used ATES to help develop a nationwide map for avalanche terrain in Norway.

“These efforts highlight the value of undergraduate research in developing skills and exploring real-world problems,” said Hendrikx. “Those skills can ultimately help lead to advances in students’ respective fields, and in this case help keep people safe from avalanches.”

“Everett is looking at whether ATES does a good job in a new backcountry ski area,” said Fox. “If it does, it can be used in other places too. It’s just another way to create useful information for people going out into the backcountry, and knowing how valid it is will help improvement and build it as a tool for people in other areas.”