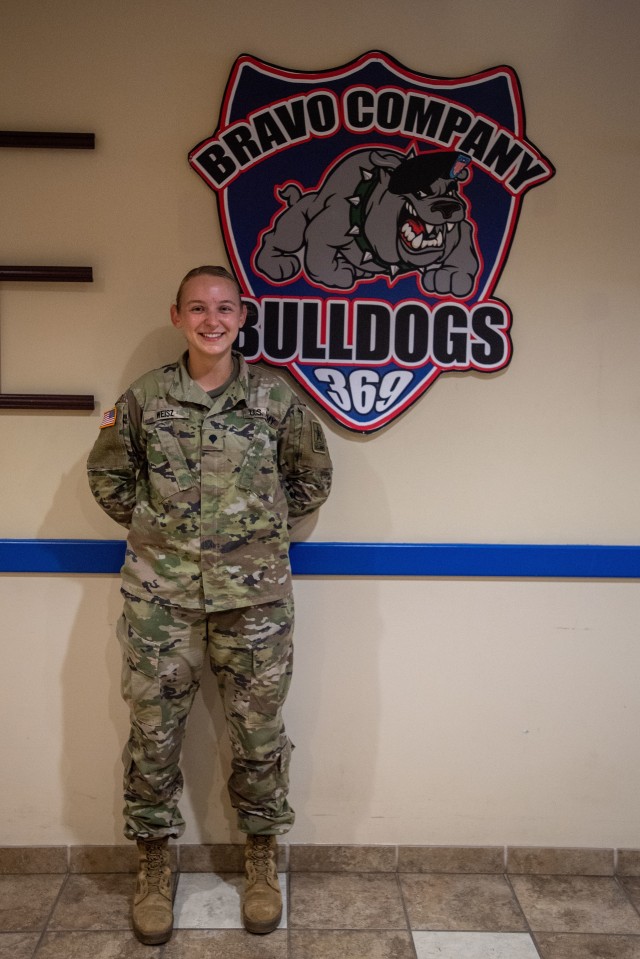 Many Soldiers join the Army as a step towards achieving their goals and dreams. That was reversed for one Soldier going through Advanced Individual Training on Fort Jackson. She qualified for the Olympics in a sport equally suited for the Army – marksmanship.

Spc. Alison Weisz, from Company B, 369th Adjutant General Battalion, will graduate Advanced Individual Training Oct. 8 and then head to the Army Marksmanship Unit in Fort Benning, Georgia. She made Team USA for the Women’s 10m Air Rifle Event for the 2021 Olympic Games, and will be part of the AMU’s International Rifle Team, and compete internationally in both 10m Air Rifle and 50m Three-Position Small bore Rifle

“It had always been a goal of mine to join the Army after qualifying for the Olympics,” said the Belgrade, Montana native. “The initial plan pre-COVID was that I was going to qualify, go to the Olympics this summer in Tokyo, in August come back, take a little bit of time off, and go to basic training. And that was all just because I wanted to look forward towards 2024 and the Olympics in Paris. The best way to do that for my career and my sport was with the Army.”

The AMU will help her hone her craft even further.

“The Army Marksmanship Unit has some of the best resources that you could imagine, for our sport specifically,” said Weisz, who graduated Basic Combat Training at Fort Jackson with Company A, 3rd Battalion, 60th Infantry Regiment. “As far as gunsmiths on hand, obviously it’s a source of income as well.”

The Army also helps her financially.

“It’s hard to get that money and financial stability outside of it, outside of anything like the Army,” she said.

According to USA Shooting, Weisz “became involved in shooting sports through a gun safety and education program out of a small club in Montana at 9 years old.” She was hooked and began her pursuit that led her to the University of Mississippi’s shooting program where she witnessed a slice of Army-life for the first time. Her great uncle was the only one in her Family to have served in the Army.

“When I was in college we had matches there,” Weisz said of traveling to Georgia to compete at Fort Benning, “because they host a lot of the national competitions and other selection matches.”

It was at these competitions she would face rivals now turned teammates.

“Even to make this Olympic team, I was competing against my now teammates at the Army Marksmanship Unit and quite honestly it was a very tight race between a couple of them and myself for the women’s 10 meter event,” she said.

In basic training she initially didn’t let her drill sergeants know that she was a world-class marksman who could split a playing card in half with a single shot. In fact, she said she found Basic Rifle Marksmanship “super- fascinating” because it reinforced principles she had known for a long time.

“I was actually really impressed by all the fundamentals that they taught and the fact that those are the same fundamentals that I still follow today and it’s a completely different type and style of shooting so it was really cool to see,” she said.

She added she was impressed how the drill sergeants were able to teach her peers “who have never touched rifles before, they’ve never seen them, and they’ve never been around them.”

While she felt home on the rifle range, she found other aspects of training difficult such as doing physical training in the hot, humid South Carolina mornings, to being rained on during training because you would be wet and have to sit in soggy clothes until later in the day when you could return to the barracks to change.

“I think the most challenging was learning how to deal with so many different people from so many different places and doing such difficult yet simple things 24/7,” she said. Things such as standing at attention, not moving, being quiet, and trying to get 60 people or more to do were difficult for people who don’t have a background founded in discipline.

“They might not have had that being raised or in their life,” she said. “In my sport, discipline is literally all it is; so it was very natural for me. When I need to do something I just do it and just deal with it even if something is bothering me to ignore it and I know and I understand that other people didn’t have that.”

Despite the challenges, Weisz said she plans on using the new experiences to help her on the firing line.

“Even though it was in using pushups or rappelling down the wall with fear … I can now take those skills I’ve learned and apply when I’m actually training and shooting so rather than questioning myself (with questions like), ‘Am I going to be able to shoot well today?’”