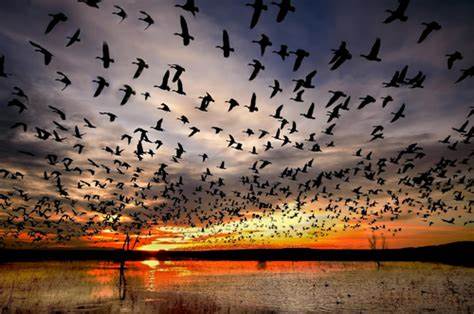 Once plentiful populations of birds are declining. 1 in 4 birds die annually in North America. There is no one reason but the sad outcome is the same.

Ornithologists have been able to use weather radar to monitor bird migration patterns. Local Bird Watchers have also been keeping records and count statistics for decades. This is how they measure populations.

Many non-native species such as pheasants and starlings have seen major declines. Native species such as Quail and grouse have also been in decline. 12 distinct families of birds are declining. They include sparrows, blackbirds, juncos, finches, warblers, meadowlarks, and other common birds. 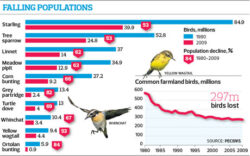 Common sense reasons for declining bird populations are habitat loss and insecticides. Taking away where birds can survive and the insects, they eat are concerns. As we build more homes and our population grows, spaces for wildlife decline. If birds do not have quality nesting habitats, they can’t reproduce.

Pheasants are an exotic species not native to North America. They once were common in a belt of states across our country. Strong populations of pheasants could be found from Pennsylvania to Washington. Now only a few western states have healthy populations. Even when habitats are manicured for pheasants, they no longer survive. The same is true for quail, which are a native bird. There may be a new disease or…

Cats are responsible for nearly 3 billion bird deaths a year! Both pets and feral cats instinctively hunt birds whether they eat them or not. Most homeowners place bird houses in their pet friendly yards. Once the baby birds leave the nest, they enter the food chain.

Wind Turbines kill nearly as many birds as cats. As wind farms grow, bird populations decline. Bird feeding year around is also a concern. Birds become conditioned to feed at a feeder and not in the wild. When the feeder runs out or the homeowners forget to refill the feeders, birds starve. If you feed birds, be responsible and only feed in the winter.

Concrete, asphalt coverings and windows are also a bird death wish. With no natural surfaces or fields to forage and nest, birds suffer. Flying into glass is a common issue. If you have a window where birds seem to crash into, it probably has a plant hanging in it. Maybe a glass film or changing a plants location would help.

Consider how your yard can become bird friendly!

For more Montana Grant, find him enjoying the birds at www.montanagrantfishing.com.