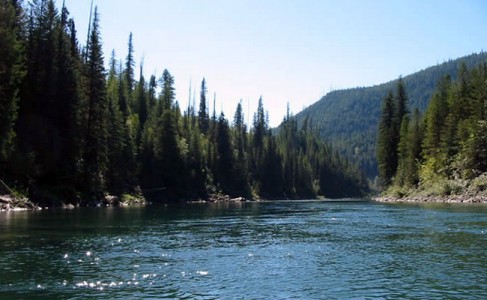 “We are fortunate to have partnered with Vital Ground on this conservation acquisition in an area of such high ecological importance,” says the Forest Service’s Hungry Horse and Glacier View District Ranger, Rob Davies. “It is a privilege to be able to manage this land for wildlife benefit, Wild and Scenic River values, and public use for generations to come.”

The 10-acre parcel near the village of Polebridge was privately owned, bordering federal lands on multiple sides. Primary support for the Glacier Gateway project came from LWCF, a national program that dedicates royalty fees from offshore drilling toward community conservation efforts ranging from municipal parks to fishing access sites. Last year, the fund received bipartisan support and permanent funding from Congress as part of the Great American Outdoors Act.

A land trust based in western Montana, Vital Ground provided administrative and financial support for the Forest Service’s purchase. Vital Ground has completed several habitat conservation projects in the North Fork Valley in recent years, helping limit subdivision and dense development in a popular tourist area that also serves as a crucial habitat corridor between Glacier’s Livingston Range and the Whitefish Mountains to the west. Vital Ground’s One Landscape Initiative identifies and conserves key habitat linkages on private lands throughout the Northern Rockies region, helping to reconnect fragmented populations of grizzly bears and other wildlife.

Forming the western edge of Glacier National Park, the North Fork of the Flathead River is a recreation destination as well as a wildlife crossroads. More than 3 million visitors traveled to Glacier in 2019, many of them passing through the Polebridge area to hike, float, fish or view wildlife in and around the North Fork Valley. Beyond tourist pressure, Montana’s booming housing market poses an additional risk to open space and wildlife habitat, but land conservation projects like Glacier Gateway and waterway protections for the North Fork—such as its National Wild and Scenic designation and the North Fork Watershed Protection Act of 2014—are helping maintain the area’s wild character.

“This is an outstanding opportunity for collaborative conservation that benefits both people and wildlife,” says Mitch Doherty, Vital Ground’s conservation manager. “With the support of the Flathead National Forest we are bringing more LWCF dollars to Montana to support a growing need for improved public land access and conservation of key wildlife habitat in the North Fork Valley.”