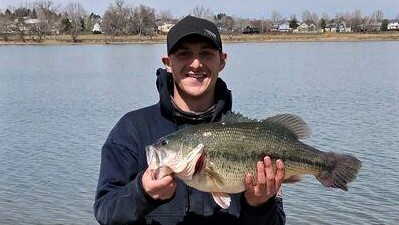 Billings has become the most recent Pig City! Lake Elmo, next to the FWP office, produced another PIG!

Ironically, Lake Elmo is soon to be drained and restored. It contains a variety of species including perch, trout, and bass. Most of these fish were originally from hatcheries but thrive in the lake.

Brandon is the epitome of a Lucky fisherman. This new State record was the first Largemouth Bass that he has ever caught! He wasn’t targeting a bass, he was fishing. His # 10 Eagle claw, snelled hook was baited with a fresh worm. He chucked the rig into the pond, laid his rod down and was playing on his cell phone! After a great fight, he dragged the State Record ashore. The fish was weighed and measured at a certified scale in Albertson’s grocery store.

The Largemouth weighed in at 9.575 lbs. and was 22.5 inches long. Brandon is having the taxidermist mount his trophy.

Montana is not the Bass fishing capitol of the world. Only a few ponds and lakes have them in their waters. Small mouth Bass are migrating up the Yellowstone River and can be found in the States warmer waters. Most of Montana is managed for trout. I have only caught Largemouth in Lake Elmo, Bozeman and Three Forks Ponds, and some ponds near Lewiston.

It seems like more records are being broken since more people are going fishing! License sales are up and with the Covid restrictions, more fishermen are spending more time on the water.

Brandon was not wearing a mask while fishing. He was enjoying Montana’s healthy, fresh air!