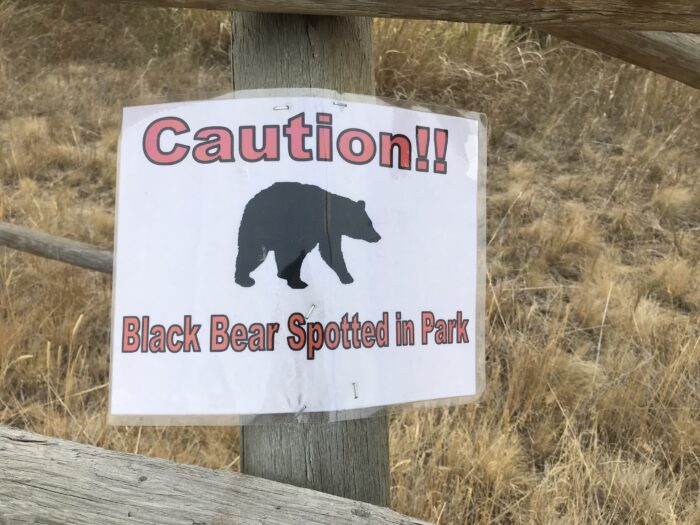 Many Glacier Campground recently restricted campers to hard-sided vehicles due to the presence of the bear. The campground is now open to all camper types again, including tents.

On Saturday, August 28, the black bear was reported moving through the Many Glacier Campground and was not readily responsive to attempts to move it out of campsites.

On Sunday, August 29, the bear returned and was observed snatching apples out of an open trunk while visitors were nearby packing their vehicle. The bear then proceeded to eat the apples at the campsite, exhibiting little fear of humans. While park staff attempted to verbally haze the bear out of the campground, the bear tried to stop at another campsite where people were preparing breakfast and after being hazed out into the woods, returned half an hour later.

Based on photographs and visitor reports, it is possible this could be the same bear that was approaching people and exhibiting unusual behavior near Grinnell Lake last week, resulting in closure of the Grinnell Lake trail on August 25th. DNA samples collected from both sites will be tested and compared to determine if the same animal was involved in both incidents.

On Wednesday, September 1, the adult female bear was trapped in a culvert trap near the Many Glacier housing area.

In accordance with Glacier National Park’s Bear Management Plan, and in consultation with park wildlife biologists, the bear was euthanized. The bear was estimated to be around four-years old and approximately 120 pounds. A field necropsy revealed it to be in otherwise healthy condition.

Food-conditioned bears are those that have sought and obtained non-natural foods, destroyed property, or displayed aggressive, non-defensive behavior towards humans and are removed from the wild. Given this bear’s behavior and successful acquisition of human foods the decision was made to remove the animal from the park. Once a bear has become food-conditioned, hazing and aversive conditioning are unlikely to be successful in reversing this type of behavior. Food-conditioned bears are not relocated due to human safety concerns.

Visitors are reminded to keep campgrounds and developed areas clean and free of food and trash. Local residents and businesses located in and around the park are reminded to secure all types of non-natural food sources including garbage, livestock feed, pet food, bird seed, and hummingbird feeders.

If you see a bear along the road, please do not stop. Stopping and watching roadside bears will likely start a “bear jam” as other motorists follow your lead. “Bear jams” are hazardous to both people and bears as they limit visibility, restrict the movement of the bear, and have the potential to increase the likelihood of the bear approaching cars and people in the future. Report all bear sightings to the nearest ranger.

Glacier National Park is home to both black and grizzly bears.  Hikers are highly encouraged to hike in groups, make noise when hiking, and have bear spray accessible and know how to use it.  For more information about recreating in bear country, please visit http://www.nps.gov/glac/naturescience/bears.htm.