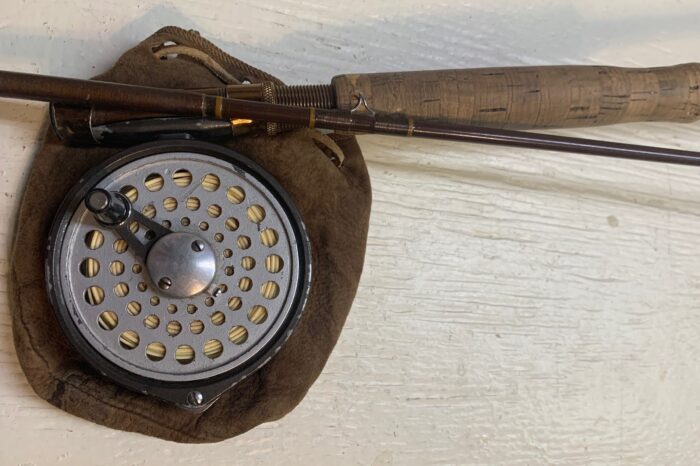 What if you could add a reel to your fly rod that allowed you to wind in your line 4 times faster? This concept is not new. The original Multiplier Reel may have been designed by a watchmaker and silver smith in the 1800’s. George Snyder created the unique reel which was known as the “Kentucky Reel”. Some say it was made in England but, a multiplier reel is not a new idea.   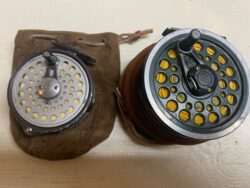 Today’s Fly Fishermen feel that the Multiplier reel is too much trouble to use. There are too many parts and too much maintenance. “You can’t dump your reel into the river and expect it to work again without some extra care.” I never suggest that anyone dump any reel into a river.

The advantage of a Multiplier reel is simple. You can reel in the fly line 4 times as quick. Early fly reels were smaller than modern reels. Fly lines were made of horsehair and wax. This made the lines heavy and slow to rewind, especially on a reel the diameter of a soda can. The spool spins on the spindle separate from the handle.

Multiplier reels have a larger arbor. This means a larger diameter to wrap the line on. Now spin the spool 4 times as fast. That’s what a decent Multiplier reel does.

Back in the day, I used my snow shoveling money to buy a new fly rod and reel. At the time, Cortland was a popular brand and quality product. I went to a local store called Divers Den in Parkville, Maryland. Maybe the guy felt sorry for a kid buying his first fly rig, or he was trying to get rid of his limited supply of fishing gear. Either way, I ended up with a 71/2-foot Cortland Fly rod, new Cortland fly line in Peach color, and a Cortland Multiplier reel.

I rigged the reel with backer and spun on the new double taper 7 weight line. MY leader was attached with a plastic knot connector that Cortland also made. The rod casted easy and smooth. This was my go-to outfit.

As fly gear evolved, I went to a homemade 9-foot Lamiglas fly rod kit, that Lefty Kreh helped me make. We met on a local stream called Deer Creek. When he tried my new rig, he was surprised how well it cast and how fast the line retrieved. “Leaving extra line on the water just gets tangled and wrapped up. The faster you get the line in, the more likely you will land the fish.” Lefty then proceeded to hook up to a huge rainbow. He was even using a Montana nymph that I had tied. I netted his 20-inch monster. Lefty joked about not giving the rod back.

My old Multiplier reel had a spring drag. Today’s reels have an improved disc drag. Cortland branded my old fly reel, but it was made in England. I still enjoy using this reel decades later. The reel is a bit heavier, the arbor a bit larger, but when you hook up a screamer, you can get the line onto the reel quickly as you navigate the bank or bottom.

Newer Multiplier reels made by Martin, Orvis or Hardy are lighter, tighter, and have better drags. LL Bean also sold a multiplier reel in their Guide Series 400. It was made in Redditch, England.  If you are tired of cranking fly line in slowly, multiply your cranking. Old age, arthritic hands and fingers will thank you.