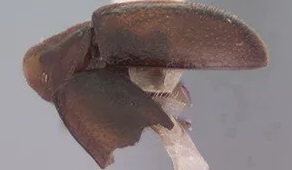 Headless Ladybugs are a Thing in Montana
By angelamontana

Back in 2012, an interesting insect was discovered in Montana. Check this out:

SALMON, Idaho (Reuters) – Sleepy Hollow has its headless horseman and now Montana has a headless ladybug.

The newly discovered insect tucks its head into its throat – making it not only a new species but an entirely new genus, or larger classification of plants and animals.

Ross Winton captured the insect in 2009 in traps he set in a sand dune while an entomology graduate student at Montana State University. Winton, now a wildlife technician in Idaho, at first thought he had parts of an ant but then discovered the bug can hide its head, much like a turtle ducking into its shell.

Winton sent his discovery to scientists in Australia working on this group of insects and the headless ladybug was formally described in a recent issue of the peer-reviewed journal Systemic Entomology.

Read the full story by Laura Zuckerman via the Huffington Post here.