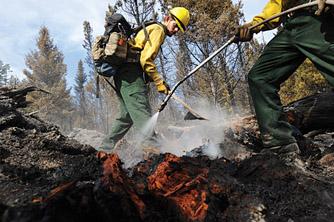 The Biden Administration today announced new pay raises and support for the wildland firefighter workforce for the next two years. The funding will come from the bipartisan Infrastructure Investment and Jobs Act (IIJA), which Tester negotiated and helped pass into law last year.

In the next few months, the Administration will retroactively increase firefighters’ pay up to $20,000 or 50 percent of their annual base from October 2021 to September 2023. The Department of the Interior (DOI) and the U.S. Department of Agriculture (USDA) will also establish a joint DOI-U.S. Forest Service program that will address firefighter mental health needs and establish a stress management staffing response. The Administration has also committed to increasing staffing and recruitment of wildland firefighters.

“For too long, Montana’s wildland firefighters have been overworked and underpaid,” Tester said. “With wildfires becoming all too common in our state, it’s critical that our brave first responders have the resources and support they need to continue protecting our communities and public lands, while staying safe themselves.”

Tester has led the effort to support firefighters and provide relief for communities most affected by wildfires in Montana.

Last year, wildfires burned nearly 940,000 acres across Montana, making it the worst wildfire season the state had seen since 2017. National Guard troops were deployed to help combat what was declared a wildfire emergency. This year, Montana is expected to suffer from another severe wildfire season.