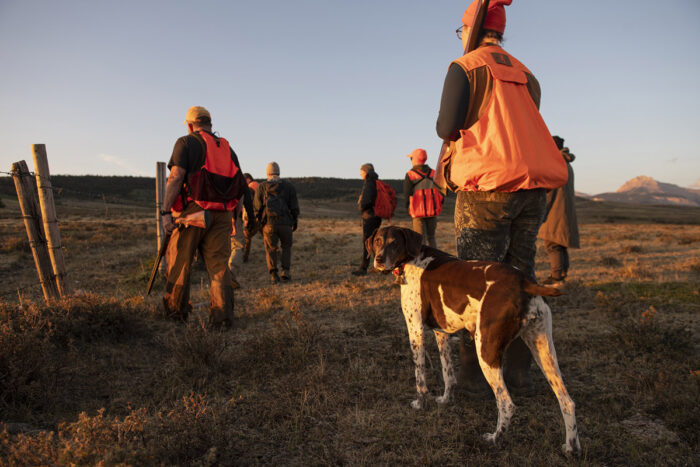 By Raequel Roberts, UM News ServiceMISSOULA
– As a salmon pink sunrise bathed the nearby Rocky Mountain range, a group of University of Montana students gathered, bundled against the chill, with their instructors and two eager pointing dogs for an introduction to upland bird hunting.

When the sun rose and their lesson began, they learned about gauges, chokes and how to read cover before setting out to hunt sharp-tailed grouse. Most of the students had never hunted before. Although they carried no guns and no birds were harvested on the two-hour foray, the students came away with a better understanding of what draws people to hunting.

That it is not so much the quarry, but the comradery formed with fellow hunters, the dogs and nature itself.

Hanson and fellow students spent the fall weekend at the 6,500-acre Theodore Roosevelt Memorial Ranch in Dupuyer as part of their studies for what is a singularly unique UM course: Wild Sustenance.

Now in its fourth year, the course is open to students from any major, with the only requirement being that participants are novice hunters.

“Almost all of us who are hunters learned from relatives and friends. We had opportunities,” said course instructor Joshua Millspaugh, UM’s Boone and Crockett Professor of Wildlife Conservation. “There is such an impediment to those who didn’t have that opportunity. The students that are here say, ‘I’ve always been interested in learning more, but I don’t know where to start.’

“And we give them that introduction,” he added. “But what we’d ultimately like to create here is a knowledgeable citizenry that understands the role of hunting in society and in conservation.”

Hanson had limited experience hunting. It wasn’t until the New Hampshire native transferred to UM last year that he decided to dive deeper into a sport that last year attracted more than 15 million Americans and generated more than $800 million in revenue nationally.

The first night at the ranch, Hanson reflected on his interest in hunting.

“There’s a bunch of different reasons why I want to learn how to hunt,” he said. There’s ethical and environmental reasons and I guess spiritual reasons, too. I just want to be more connected to the land and more connected to my source of food.

“But I didn’t know the first thing about what I need to buy, and I don’t know what to do with it, once I buy it,” he added. “Hunting equipment is very expensive, and I’m a college student trying to just pay rent and buy groceries.”

During their stay at the ranch, 200 miles north of Missoula and owned by the Boone and Crockett Club, students learned about grizzly bears and how to avoid them, the basics of cooking wild game, firearm safety and archery, how to properly dress a white-tailed deer and why lead-free ammunition is better for wildlife, the environment and consumers.

In the evening, students shared their thoughts on the day’s events by writing in their class-required journals.

For Madison Crane, a wildlife biology graduate student, it wasn’t so much firing a rifle that was front and center in her concerns.

“It’s what I do after,” she told the group. “Having the skills to properly care for an animal after I take the shot, whether it be tracking it or processing it.”

Crane, who grew up in New England in a family that didn’t hunt, said her exposure to the world of hunting came while working for a number of wildlife agencies over the years.

“I’ve had some really great opportunities to work with hunters,” said Crane. “And I feel I’ve finally been in Montana for enough years where I can feel comfortable on the landscape and feel like I’m ready to take that next step.”

Crane, one of five women in the class of 11, said finding mentors and fellow hunters is key for her to achieve a comfort level with a sport still dominated by men.

“I am hoping to get out with some of the people who are actually here,” she said. “And, I’ve got enough friends that also go hunting that I know I can trust and who are ethical hunters.”

The subject of ethical hunting, in fact, is central to the weekend activities and the campus classroom instruction that accompanies it. So, too, is respect for the animals that are harvested – a respect that includes using every part of the animal possible and the proper disposal of the parts that aren’t.

“We lead with ethics, because we feel strongly that is where hunting should start,” Millspaugh said. “Ethics should be a critical feature that people consider before they ever step in the field and identifying what their own individual code of ethics are and what they view as acceptable.”

Throughout the course, students are strongly encouraged to express their views on hunting no matter where they land on the subject.

“It’s important we put everything on the table when we are talking about this,” said course instructor Libby Metcalf, Joel Meier Distinguished Professor of Wildland Management at UM and associate dean in the W.A. Franke College of Forestry and Conservation. “We don’t want anything off limits. We want an open dialogue and set a stage to be a place for inviting conversation.

“Some students come in with a degree of skepticism,” she added. “And for some it’s a profound experience. We’ve had students at the end of the course say ‘Hunting isn’t for me.’ And that’s OK.”

As a graduate student in UM’s Parks, Tourism and Recreation Management program, Peter Whitney understands the valuable role that many hunting organizations have played in the conservation of game species. But as an outdoor enthusiast and longtime vegetarian, he struggles with the idea of hunting.

“The idea of eating meat brings up a lot of things to me that challenge my values. It feels selfish, like something I don’t necessarily need to connect with the environment more broadly,” Whitney said. “I enrolled in the class because I wanted to color the picture with a bit more nuance and think about my own values and not being so black and white, and explore the gray area in between.”

As the semester wound down, all three students said they learned as much about themselves as they did about harvesting game, and that their comfort level with the logistics of hunting had grown considerably.

Like many experienced hunters, each student said fitting this newly acquired sport into their busy lives presents more of a challenge than reading animal cover, but even if they never step onto a field again, their understanding of the role of hunting in society has been set.

And that, said Millspaugh, is what Wild Sustenance is all about.

“We try to be very clear up front that this class is more about how the student comes out on the other side,” Millspaugh said. “They may not ever hunt, but they will have a much better appreciation and touch point for what it is and the roles it serves.”