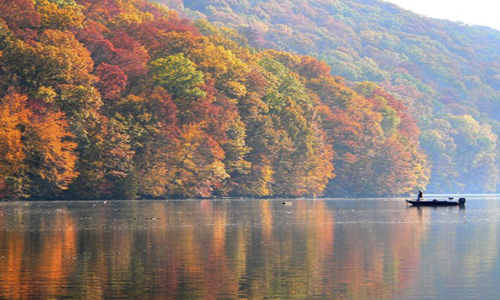 Hitting the waters for some fall fishing
By Hookemharry

A lot of folks are still hitting the waters of Montana for some great fall fishing. The fishing is good and so is the summer- like weather we have been experiencing in September.

Some of the more popular campgrounds are near capacity on the weekends, like Black and White Sandy Campgrounds over on Hauser Reservoir by Helena.

September trout fishing on the lakes is always good and this year is no exception. A few days ago, I was fishing on Hauser and the trout fishing had started to slow down on that lake after a great day ton Holter Reservoir the previous day.

My girlfriend Berny Croy and I were trolling with four rods; two in downriggers at a depth of 14 feet, another one long- lined out about 100 feet and the in final line equipped with leaded line about one and half colors behind the boat.

All the lines were pulling a different type of Rapala lure. The lures ranged in colors from orange/white to brown trout patterns and they were either countdowns or jointed and all in the J-7 size. As I have learned over the years, when fishing is slow, it is time to try another technique.

I noticed that some of the other boats that had been catching fish on Hauser the day before were using cowbells. One of those anglers was Jim Ault from Missoula. Ault told me that he was long lining monofilament line behind his boat pulling cowbells and a wedding ring tipped with a nightcrawler.

We both guessed that the fish he was catching were in the five to eight foot depth. He told me that this method of fishing worked very well for him for the two days that he had fished Hauser.

I have never been a big fan of using cowbells as an attractor, because for me, the cowbells take away the feel of the fish after it is hooked. However at the time, we were not hooking any fish, so I cam e up with a compromise.

I dug into one of my tackle boxes and found two cowbells and decided to attach them to the 10-pound balls on my downriggers. I then attached the line releases to the cowbells and put my fishing lines in the release. By employing cowbells this way I had the best of both worlds.

I was using the cowbells to attract the fish to my lure and once the trout hit my lure I wouldn’t have to contend with the cowbells, while I reeled the fish in. I lowered the downriggers to an 8 foot depth and began trolling the new set up behind the boat at two miles per hour. The results were immediate.

Within five minutes I had a fish on and pulled in a nice three pound trout.

Nevertheless at the end of the day I was excited that I had found one more way to catch fish by using my new downrigger-cowbell set-up.