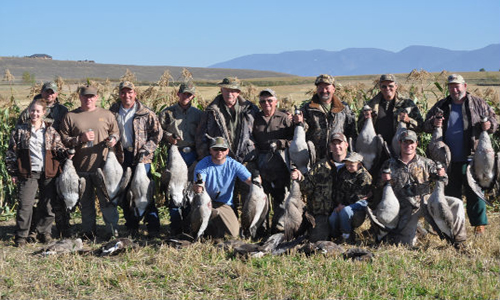 The opening of waterfowl season last Saturday in Montana was greeted plenty of sunshine. Duck and goose hunters prefer overcast windy conditions. Those weather conditions make it easier to lure geese within gun-shot range. The weather was so nice on Saturday some of the hunters might have wished they were in a boat fishing lake trout on Flathead Lake during Fall Mack Days rather than sitting in a blind waiting for geese. But as they say in the radio business, “the show must go on rain or shine”. On Thursday before the 12th annual Goose Blind radio broadcast, Jens Gran from Polson and Jaye Johnson from Charlo went out to scout geese and they were very excited. They watched over 500 geese land in the field where the goose blind and decoy spread would be set up. “It is the largest number of geese that we have had coming to the field before any of our past Goose Blind Broadcasts”, said Gran. The weather forecast for Saturday called for a blue bird day with highs in the 80’s and that had Johnson thinking that the shooting would be over by 10am opening day. “I bet with the sun shining bright tomorrow morning and all the goose hunters’ hunting tomorrow morning the geese will quit flying around mid morning”, said Johnson.

Official shooting time was sunrise at 7:36am Saturday morning and the fourteen hunters participating in this year’s Goose Blind Broadcast were ready for the geese to start coming in. It didn’t take long with the first shot of the morning coming moments after at around 7:40am. Two geese came into the blind and only one flew away. Then another flock of seven geese followed, flying low from the south with their wings set at about 100 yards away. We shot three geese from that flock and the 2010 Goose Blind Broadcast was off to a good start. However, once the sun peaked over the Mission Mountains to the east of our blind it started to get a little harder for us to convince the next flock of geese that it was safe to come in within gun-shot range. After sunrise, the morning dew had made our full bodied decoys look, well like full bodied decoys. The sun made the wet bodies shine. Most of the other flocks that flew by to take a look, and there were hundreds of them, stayed well out of gunshot-range as they circled our blind surrounded by four separate flocks of decoys. There was no wind and that made goose hunting even harder. It was however opening day and that meant that there were still some geese that were not as smart as they should have been. For the morning goose hunt we ended up with 23 geese. As it is every year, it was a lot of fun creating the blinds and setting them up in the field Friday afternoon. Then of course the goose hunt itself Saturday morning. You can view all the Goose Blind Broadcast activities from start to finish in a great video by logging onto www.montanaoutdoor.com