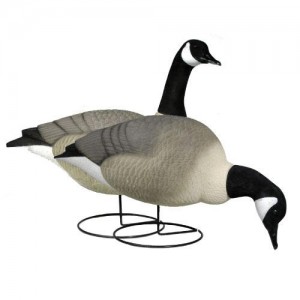 See the Montana Fish, Wildlife and Parks report below:

A Great Falls man was cited Nov. 3 for shooting at goose decoys he thought were real while the waterfowl hunters hunkered down nearby.

Anthony Derosa, 41, was charged with three misdemeanors: shooting from a roadway, and waterfowl hunting without state and federal waterfowl stamps.

The incident happened late in the afternoon when, Fish, Wildlife and Parks game warden Brett Logan was called by TIPMONT to the Morony Dam Road.  Cascade County Sheriff’s deputies assisted.

A pair of goose hunters said they had set out several decoys in a field and were camouflaged lying nearby when a small white car stopped on the road about 100 yards away.  Someone jumped out and started shooting at the decoys with a .22 caliber rifle.

Logan found Derosa and the car at Morony Dam.

Derosa claimed he thought the geese were real but he was just trying to get them to fly, Logan said.

The two goose hunters were fortunate, Logan said. They normally sit inside the group of decoys but on a whim decided to lie in the field away from them.

Derosa faces fines of $135 for each of the three charges and possible revocation of his hunting, fishing and trapping privileges.