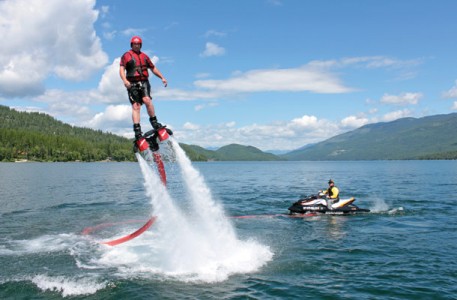 FlyBoard Comes To Montana!
By OutdoorAly

Fireworks weren’t the only show in town on the 4th of July in Whitefish; a SkyBoard demonstration was going on at Whitefish beach! What is FlyBoard you ask? According to their website it is a jet propelled license to fun. Strap on a board, similar to a wake board, and in no time you can be propelled straight out of the water.

Here is how it works: a simple device bolts on to a Jet Ski routing the water jet through a long hose that connects to a pair of jet boots and hand-held stabilizers.  The arrangement lets you fly, Iron Man style, up to 30 feet in the air – or leap headfirst through the waves like a human dolphin.

Two Whitefish men Shawn Finley and Justin Heyne first heard about flyboarding after a friend of theirs had traveled to Costa Rica last winter. Flathead Beacon writer Justin Franz hung out with the pair and reported this:

“We saw (video) and were just so blown away, we knew we had to bring it to Whitefish Lake,” Finley said. “We knew the people here would love it.”

Earlier this year, Finley and Heyne traveled to Florida to buy a board and get trained on how to run it. Upon returning to Whitefish, they organized FlyBoard of Montana and got approval from the city council to operate on the lake. Their first flight was in April and since then about 75 people have tried it. Trips begin at City Beach, where customers board a pontoon boat and are taken out on the lake. On the boat, people are geared up and then jump into the water while one of the instructors operates the Jet Ski, which moves the board up and down out of the water.