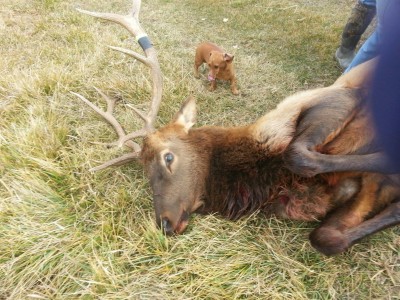 No Elk Tag Sandwich for Dan Clagett this Year
By angelamontana

Dan Clagett, of Stevensville, was successful this year and scored a muley, but he really wanted elk meat in his freezer.  He went out elk hunting this season with his son, Shane, but they didn’t see anything.  The duo was hunting an area that only allowed the harvest of cows and still saw nothing.

Early last week started like any other week for Dan, until he looked outside and noticed a herd of elk passing through his yard.  Living in rural Stevensville, the term “yard” might not be the appropriate word, but the elk passed through his property.  Dan spotted a nice bull in the bunch and grabbed his rifle.  Without hesitation, Dan shot the bull while standing right near his house!

Now, this is the kind of thing that doesn’t happen every day, but I still think it’s pretty cool to hear stories of when it does happen!  I imagine packing the bull out was slightly easier than it would have been if he was out in the mountains.

There will be no elk tag stew for Dan this year!  Very nice work! 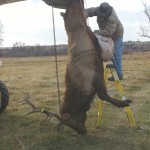 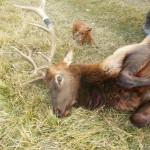