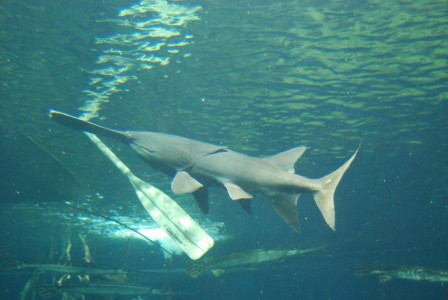 Action continues to be phenomenal for Catch and Release Paddlefishing on the Upper Missouri River River (White Tag) Area. Continuous High Water Flows have made for a banner year!! 2014 has been somewhat of an anomaly. Usually we will have several large peaks and valleys of varied flow rates, but it has stayed pretty much level at a good, solid, high rate all along so far this season!! Current river flow rate here is 17,500 cfs. 127 lbs. was our largest Harvested Paddlefish this season. Catch and Release will continue in this area throughout June 15th. A week of much warmer weather has renewed the baitfishing action. The Catfish bite has returned quite well. Walleye and Sauger are also turning back on, though still slower than the previous activity. There are still plenty of spots available at James Kipp so far. Slippery Ann and Rock Creek have plenty of room, though the Memorial Day Weekend crowd is just starting to arrive.
Currently at Intake (Yellow Tag) Area, 544 Paddlefish have been harvested. 96 lbs. has been the largest. Due to multiple snag situations in the river there, bring lots of extra tackle. Tuesdays, Wednesdays, Fridays, and Saturdays are Harvest Only Days and Sundays, Mondays, and Thursdays are Catch and Release Only Days.
North Dakota Harvest has closed as of May 18th. Catch and Release Only will continue through 9 pm tonight, May 22nd. 123 lbs. was the largest
Harvested Paddlefish this season.
Have a safe and happy Memorial Day Weekend, everybody!! and Take a Kid Fishing!!!
(Report by Glenn Siroky; Feature photo via realmonstrosities.com)