Cold temperatures and snowfall kept hunter participation and harvest slow but steady in the third week of the general big game hunting season in west-central Montana.

“Snow provided good tracking conditions in some areas, and the cold snap has been enough to get the animals moving into places where hunter are more likely to cross their paths,” said Mike Thompson, FWP Region 2 Wildlife Manager.

The hunter check station near Bonner has tallied 4,167 hunters this year, down 4 percent from last year, and 7 percent below the four-year average. Elk harvest recorded at Bonner remains low this season, with 37 elk checked so far, 16 percent below last year’s pace.  Deer harvest remains up with 43 mule deer, compared to 25 at this point in the 2013 season, and 195 white-tailed deer, compared to 188.

In the southern part of the region, hunters made 3,274 trips through the Darby hunter check station on weekends so far this season, 11 percent higher than last year’s tally of 2,949 hunters during the same weekends.  However, the harvest of 118 elk at Darby lags behind the 127 elk checked last year during the comparable sampling period, and the mule deer harvest of 24 is running behind the harvest of 33 mule deer at this time last year.  White-tailed deer harvest through Darby remains higher than last year, with 74 checked, up from the 65 whitetails checked on weekends last year at this time.

At the Anaconda check station, hunter traffic spiked upward in the third week.  The harvest of 31 elk through Anaconda so far this season is 21 percent lower than last year and 34 percent below the four-year average.  Deer harvest through Anaconda is low every year, and the tally of 22 mule deer and 10 white-tailed deer so far is on par with previous years.

“The three check stations in Region 2 sample particular hunting conditions that are not necessarily representative of other portions of west-central Montana, but they do give an impression of hunting and harvest levels compared with previous years while the hunt is underway,” Thompson said.

For setting hunting regulations, FWP relies on the statewide harvest survey, which is conducted by telephone after the season closes and surveys a random sample of hunting license-holders in every hunting district.

The general rifle season for deer and elk runs through Sunday, Nov. 30. 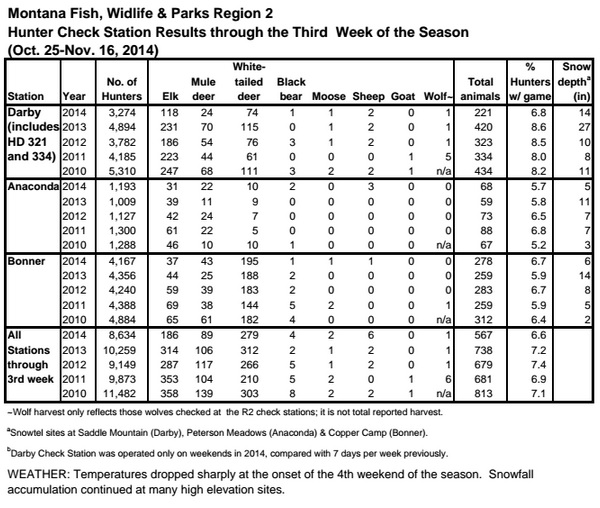