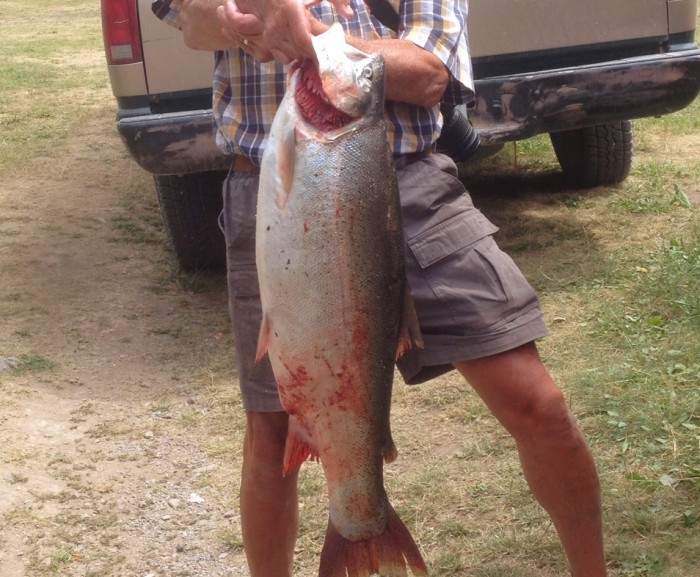 Many of our viewers asked, “What the heck is a Triploid Arlee Rainbow Trout??” after the post about the 21 lb Rainbow caught out of Lake Mary Ronan.  We did some research and received the following information from retired fisheries manager, Jim Vashro.

To sum up the process,  fish eggs in hatcheries are treated after fertilization with precise heat and pressure at precise intervals so the resulting fish have three strands of chromosomes (triploid) instead of the normal two (diploid) strands in their DNA. Triploid fish appear normal but can’t reproduce so it is hoped they will grow longer/larger, their numbers can be controlled and they won’t interbreed with other reproducing fish.When a normal egg is fertilized it receives a set of chromosomes from each parent that combine into that classic helix pattern of DNA– e. g., diploid. Cells multiply by splitting those strands of DNA, copying each strand and combining back into additional DNA/cells. That process happens in an orderly manner in early cell development.

If you really want to dive into this process further, here is a more detailed summary of the process. Geneticists and fish culturists discovered that by subjecting the eggs to precise heat and temperature at a certain time (about 20 minutes after fertilization which is about the 5th cell division, I’m not sure on sequence/timing) the cells would produce and combine a third set of DNA – e.g, the cell now has DNA with triple (triploid) strands instead of double (diploid). The fish appears normal but cannot reproduce because the DNA strands don’t match.

The initial thought was that triploid fish would not reproduce so they wouldn’t divert energy into eggs and sperm and go through the rigors of spawning. The energy freed up would let the fish grow bigger. Also, some fish like salmon might not be timed to die. That has happened in some cases, triploid fish can grow much larger than their diploid brethren. The world record rainbow from Diefenbaker Lake, Saskatchewan as well as rainbows in the Columbia River are triploids.

However, triploids are not the silver bullet as hoped. Montana has found that many triploids still go through the motions of spawning, even producing sterile eggs. The process of heat/pressure produces higher egg loss (30-40% or more) so there is an upfront cost to produce more eggs. And it seems like triploids might not be able to withstand stress (high water temperature, poor water quality, competition) with poorer survival in the wild. And triploiding is not always 100%, some of a batch of eggs may still develop into diploid fish. It’s a work in progress.

Montana is still experimenting. One obvious benefit would be to produce larger fish, particularly in a water where you don’t expect them to successfully reproduce anyway. The other benefit would be where you are trying to protect the genetics of existing fish stocks. Montana is planting triploid Gerrards/Kamloops into Lake Koocanusa because BC doesn’t want rainbows interbreeding with their westslope cutthroat. Good plan but few seem to survive beyond 24”. You could plant triploid rainbows or cutthroat in a lake or reservoir knowing they won’t interbreed with stream stocks above or below. There are attempts to produce triploid walleye so that fish could be stocked but numbers could be controlled to minimize impacts on other species.

If you would like more information on what Montana Hatcheries are working on, contact Hatchery Section Manager Eileen Ryce @ 444-2448. 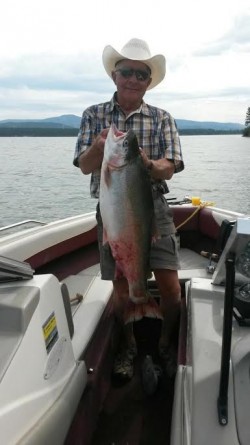 Pictures of other triploid trout caught.