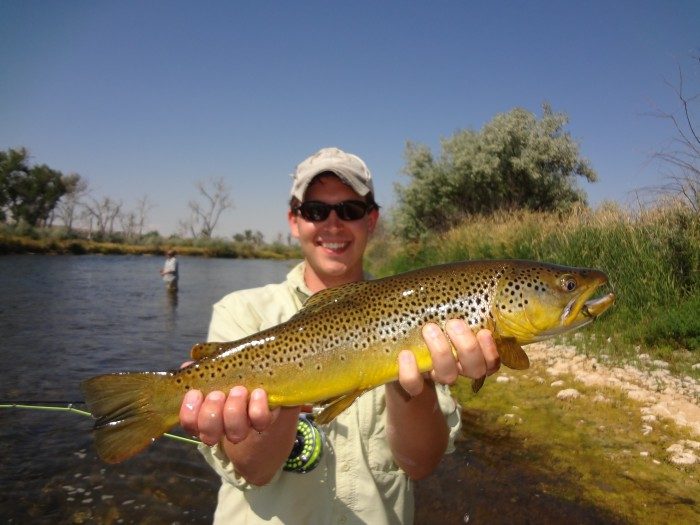 BILLINGS – Trout numbers in south central Montana’s Bighorn River are at record lows this spring, according to scientific surveys completed recently by Montana Fish, Wildlife and Parks biologists. The combined number of catchable-sized brown trout and rainbow trout in the river is the lowest seen by biologists since current survey methods began in 1992.

The low numbers, particularly in fish hatched in 2017 and 2018, correspond with high river flows below Yellowtail Dam during March and April of those years.

Mike Ruggles, FWP’s regional fisheries manager, said that this spring’s surveys showed 370 brown trout and 870 rainbow trout – all over eight inches long – per mile of river. That is fewer than 20 percent of the average measured since 1992. Noticeably missing in the survey were brown trout from the 2017 and 2018 hatches, when high flows dominated March and April.

Brown trout lay their eggs in gravel on the bottom of the river early each winter, Ruggles said. The eggs remain in the gravel until they hatch in March and April.

Spring flows of more than 6,800 cubic feet per second in the Bighorn River begin to move some of the spawning gravel enough to kill either unhatched eggs or very small fry. By May and June, the brown trout fry are big enough to survive higher flows, he said.

Rainbow trout, meanwhile, spawn in the spring and the eggs hatch starting in June. High flows in early summer may have the same fatal effect on them.

Fish numbers measured this spring were similar only to those from the drought years of the early 2000s when flows frequently fell below the 1,500 CFS threshold that trout need to thrive in the river.

Some bright spots in this spring’s survey included the number of fish longer than 15 inches, which hatched during 2014-2016 when spring flows did not exceed the thresholds that are fatal to eggs and new fry. Those older fish are starting to age out of the system, however, and their numbers will decline significantly in the next two years. Without many fish from 2017 and 2018 coming up to replace them, fishermen could see depressed population numbers for a couple of more years.

Also, river flows up to 10,000 CFS this spring did not start to increase until most of the brown trout had hatched, leaving hope that they will survive and thrive in the river where there currently is little competition of food and space. A followup survey this August and September – when this year’s new brown trout are big enough to count – will help biologists predict how soon populations of catchable-size fish could recover.

FWP biologists work closely with Yellowtail Dam managers from the federal Bureau of Reclamation, which is charged with balancing flood control, power generation and fisheries interests.