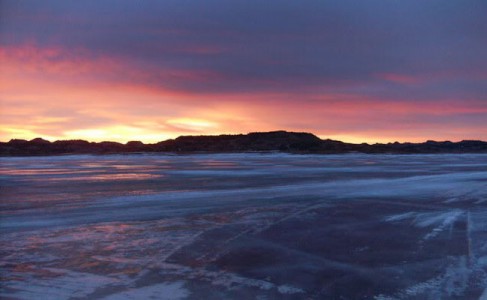 In 2000, I took my 2 sons, age 11 and 14, ice fishing on Fort Peck Reservoir, in Montana. We arrived at the edge of the ice about 8:00 PM. There were vehicle tracks all over the ice, and we talked to some of the campers about the ice conditions. They said it was 18″ to 36″ thick. We walked out and drilled a hole, just to verify, and it was truly close to 3 feet thick.

We drove my 1997 Dodge Cummings 3/4 ton Turbo Diesel truck onto the ice and started fishing. It was 10 below, and a little windy. We fished for an hour, then moved 1/2 to 1 mile south on the ice and set up again. By the time we moved for the fifth time we were about 4 miles from where we came onto the ice. It was 1:30 AM when we moved one more time, before we were going to nap. But as we proceeded, 100 feet from shore and over 100 feet deep water, all of a sudden, the truck went ker-sploosh, through the ice and stopped with the water line even with the top of the hood of the truck.

I told the boys to slowly open the doors as far as they could, and use the doors to climb out on the ice. When the doors opened, a tidal wave swooped in and soaked us all, filling the truck with water. The three of us, did manage to get out safely on to the ice, but we were soaking wet, and in serious trouble. The wind froze our wet coveralls immediately. I mistakenly had found an artesian, warm spot, feeding the lake that melted a layer in between two thin layers of ice.

The truck, having gone through the top layer of ice, then 3 feet of water, then about 3 inches of the bottom layer of ice, where the tires went through, but the bumpers luckily hung on it, or we would have gone to the bottom. Our coveralls were like thick hard cardboard, but I told the boys we need to get moving. We followed our tracks for hours, as the temperatures dropped to -30 deg.

At about 3:30 AM we spotted a camper trailer, with a small light on. We banged on the door, waking them up, and they took us in to get us warm. They said they would take a look at the mess we were in the next morning. His Jeep winch was unable to move the truck the next morning, so I called a tow truck. It came from over 110 miles away, to help try and get it out.

The driver was extremely reluctant to cross the ice, even where it was safe, but it was the only shore line, close enough to reach the truck with a wench line. I finally persuaded him to cross. He had to run his line out to it’s max to reach the truck. He hooked onto it and we broke all the ice out around the truck. He tried for 5 hours yanking on it, before he broke his cable. It had only moved 2 feet. He had to go back to town and get a heavier tow truck, but a storm blew in, causing a week and 1/2 of delay.

He returned with a semi tow truck, and moved it about 40 feet before he broke that cable. So, he returned with 2 semi tow trucks, and finally yanked it to shore. The truck was totaled, and the towing bill was stupendous. We were just lucky to have survived the ordeal. And yes I still ice fish, but driving on the ice, is a risk, I do not take anymore. 😮