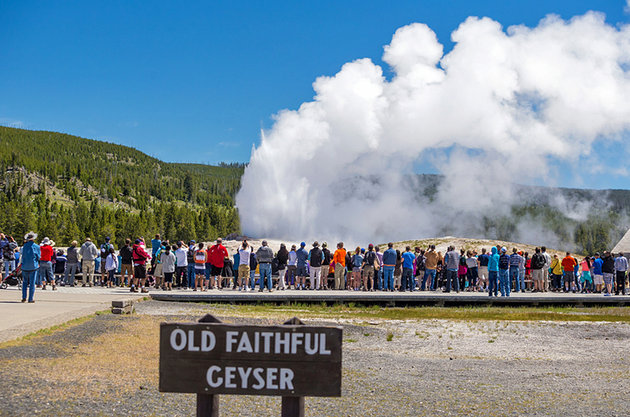 Acting United States Attorney Bob Murray announced today that AARON E. MERRITT, age 37 of Madison, Maine pleaded guilty to trespassing on the Old Faithful thermal area in Yellowstone National Park (YNP). Merritt appeared in front of Magistrate Judge Mark L. Carman in Mammoth Hot Springs, Wyoming on July 1, 2021, for the arraignment and sentencing.
On July 7, 2020, while wearing a raccoon skin hat and waving an American flag, Merritt ran out on the thermal area and up to the geyser of Old Faithful more than once. He then failed to appear for his court hearing on July 23, 2020, and a warrant was issued for his arrest. He was arrested on June 5, 2021, in Maine and made his appearance at the Yellowstone Justice Center in YNP. Merritt was sentenced to 15 days imprisonment with credit for four days served. He was fined $200 plus $30 in court costs and a $10 special assessment fee. He was also banned from YNP.
This case was handled by YNP law enforcement rangers and prosecuted by Assistant United States Attorney Stephanie Hambrick.