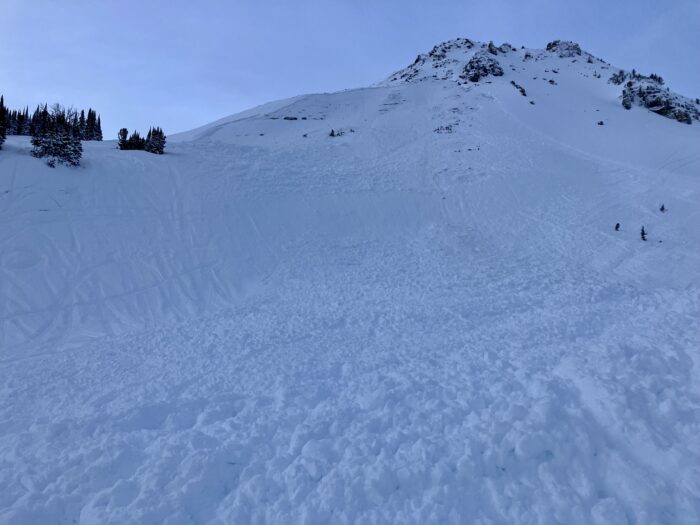 On December 31, 2022 a snowmobiler was killed in a very large avalanche north of Cooke City. The avalanche occurred near Daisy Pass on Crown Butte on a southeast facing slope at 9,800’. Two riders from Washington were snowmobiling uphill on adjacent slopes. One rider was climbing a steeper slope and triggered the avalanche 100-200’ below the top. He was carried 600 vertical feet and buried 5 feet deep. The buried rider was wearing an airbag pack that was not deployed. Both riders had shovels and probes. They were not wearing avalanche beacons. A nearby group of riders rode up to the slide within minutes after it happened, saw a buried snowmobile and began to search for the rider. One rider from that group went into Cooke City to alert Search and Rescue. The buried rider was located with a probe line an hour after the avalanche happened. He was unable to be revived with CPR and AED at the site. The avalanche appeared to be 2-4′ deep, 500′ wide, 600′ vertical, and broke on weak snow near the bottom of the snowpack. Our deepest condolences go out to the family, friends, and those involved.