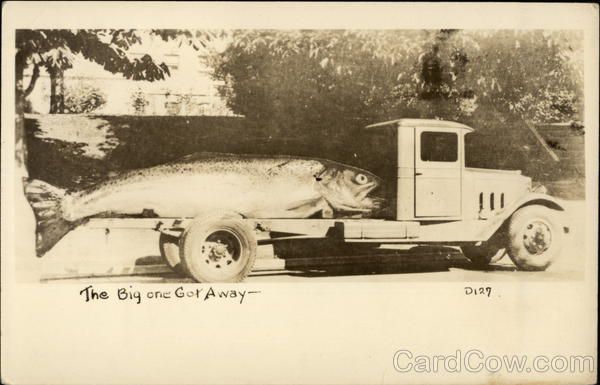 Southwest Montana is Big Sky Country. It also is the home to what is arguably the best trout fishing in the world. This Fly-Fishing Mecca took decades to evolve.

The primary Blue Ribbon Rivers are Yellowstone, Madison, Firehole, Gallatin, and other nearby rivers. There are also many other superb fisheries throughout the state. Yellowstone Park is also considered fly fishing holy waters. Ironically, over half of the watersheds and lakes in Yellowstone Park were devoid of fish until they were stocked in the late 1800’s. Stocking continued from 1889-1960’s, when most stocking was banned. Other excellent fisheries such as the Bighorn River are manmade because of cold-water releases from dams. Many once healthy rivers were destroyed due to mining, logging, and pollution.

Some stockings still take place in the park. Native Non-Native waters are being sanitized of non -native trout and restocked with native species. The Gibbon River and Soda Butte Creek are two examples. Illegal stocking has damaged the native Cutthroat fisheries in Yellowstone Lake and may never be resolved.

Here is a Fly Fishing Timeline of Trout Beginnings in this area.

1889– Government stocking began and continued until the late 1960’s.

1936-1937 British Businessman and angler Howard Back visited the region and published the first book. “The Waters of Yellowstone with Rod and Fly!” He was a competent bait fisherman as well as using the first primitive wet flies.

1938   A schoolteacher, from back east, named Dan Bailey, opened his Livingston fly shop. This was the first shop to promote guided trips into the region. This is also when Ray Bergman visited the park and wrote his famous book “Trout”. 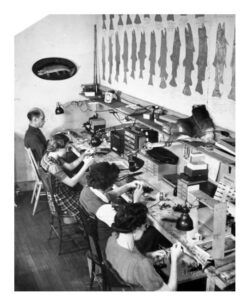 During this same time, Don Martinez wrote about the area and promoted his secret fly called a Wooley Worm. He opened the first one room fly shop in West Yellowstone.

1947   A fly fishing guide that worked for Don Martinez opened his own shop. This angler was Pat Barnes. This shop would later be taken over by Bob Jacklin.

1952    A young man from Manhattan, MT. opened a trout shop in West Yellowstone. Bud Lilly served the fishing community for over 35 years. 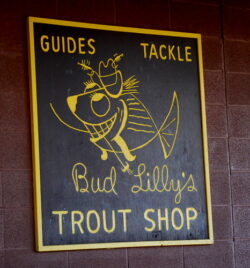 1970   Charles Brooks became a local expert after fishing and writing about his beloved trout waters in the park. He wrote the great books, “The Trout and the Stream” and “Larger Trout for Western Fishermen.” 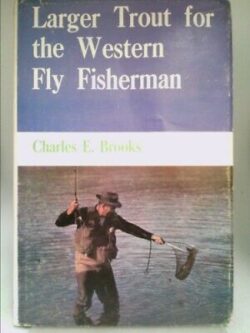 1981 Madison River Outfitters opens for business in West Yellowstone. Their first shop was a trailer.

1990   Whirling Disease hits the Madison and Gallatin Rivers. 90% of some trout population lost in some areas.

1992 “A River Runs Through It” is released in theaters. Trout fishing in Montana is changed forever. This film created a huge pressure on the local fisheries, that continues to this day.

Everything changed after the River Ran through the heart of Big Sky Country. Suddenly trout fishing ended up on everyone’s bucket list. The thought of catching some trout on a fly in Big Sky Country became irresistible.

Since this film, there have been more shops, guides, outfitters, and infrastructure built on exploiting trout fishing. Catch and Release fishing has become important. Many think that since the trout are released, the fishery will be fine. The problem is that the fish are not released until a cell phone record, picture, and video is taken. New fly fishermen take pictures of the entire battle. They also take a picture of every fish they catch. This takes time and the fish are returned weakened and damaged.

Fish can only be caught so many times before they die. The Big Sky Beginnings could be the end of Big Sky Trout fishing as we know it. The enormous fishing pressure on public fisheries is taking its toll. During the Covid pandemic, those who could not work, could still fish. Record numbers of anglers flooded the Big Sky Fisheries. Ripped lips became a reality, if the fish survived being caught several times.

There needs to be a healthy balance. Currently, Fishery officials are fishing for smart, healthy, and appropriate solutions. Maybe there needs to be a limit on how many outfitter/guide trips pound the rivers. Perhaps a Catch Limit needs to become a rule. Like the Buffalo, wild trout are not inexhaustible. Trout can be stocked but for many, “Wild Trout” are the only trout to catch.

The Trout evolution continues. These amazing fish have survived and overcome so many challenges. The greatest challenge is happening now.