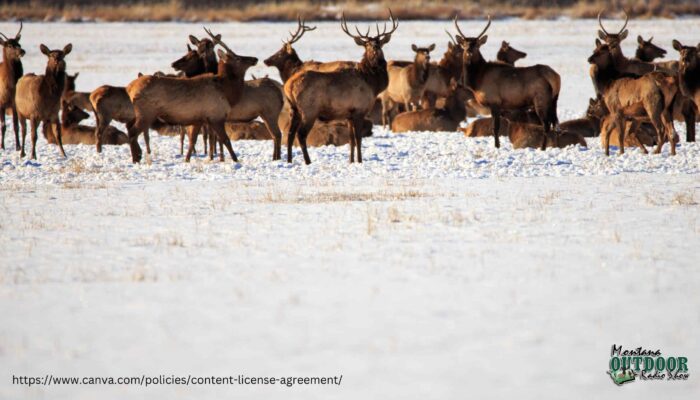 According to a press release dated January 10, 2023 by Iowa Department of Natural Resources, elk are wandering to Iowa more frequently each year, as they are getting caught on game cameras.

Elk seem to be visiting Iowa more frequently each fall, and thanks to social media, their visits are now shared at the speed of downloads among tens of thousands of people among the various social networks.

Most of these sightings are in western Iowa due to the proximity of the larger wild elk herd found in the Black Hills of South Dakota and in central and western Nebraska. These visitors tend to be young males conceivably searching for new territory.

And this fall was no different.

“I had reports coming in weekly to my office all fall,” said Josh Gansen, wildlife biologist with the Iowa Department of Natural Resources Saylorville Wildlife Unit covering nine counties in central and west central Iowa.

The number of individual elk visiting the state is likely very low, state experts say, and the frequency of reports in the fall are based on these elk covering a lot of distance and appearing on different trail cameras.

“It’s to the point that it’s no longer uncommon,” Gansen said.

The elk rut (breeding season) out west is in September and October, which is around the same time as the juvenile elk have been showing up in Iowa. The Iowa DNR is collecting scat and muscle tissue for DNA analysis to learn more about these animals, including where they are coming from, said Doug Chafa, wildlife biologist with the Iowa DNR’s Missouri River Wildlife Unit in western Iowa.

Elk were native to Iowa, but left as the state was settled. While there isn’t a population in Iowa, they, along with moose, are protected in Iowa Code, which includes a $1,000 fine if illegally killed. That does not exclude the right of a person from dispatching an elk that is causing property damage or from causing physical harm.

“Three or four years ago, we had an elk that was trying to get into a penned livestock area damaging the fence in northwest Iowa, and it had to be dispatched,” Chafa said.

However, most elk wander in and out of Iowa with no issues. But not all. This fall, an elk was hit and killed on I-80 and another was found dead within sight of Hwy. 20, east of Sioux City. The Woodbury County elk was a 1 to 1-1/2-year-old adolescent animal weighing approximately 450-500 pounds which is significantly larger than a white-tailed deer.

“An adult elk can weigh between 750-800 pounds with hooves as large as your hand,” Chafa said. As a comparison, a five-year-old buck white tailed deer can weigh up to 250 pounds at its heaviest.

Large wildlife always catches peoples attention and Chafa said if you encounter an elk, give them plenty of room and don’t approach it.

“Take a moment to enjoy seeing a wild elk in Iowa,” he said. “As long as these animals are not causing any problems, our position is we are going to leave them be.”