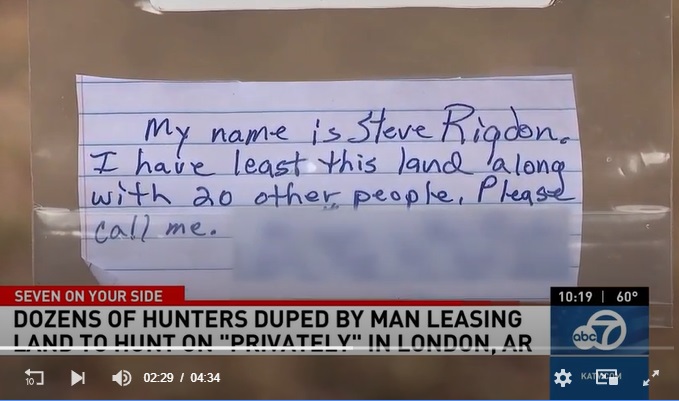 Meanwhile, in Arkansas, hunters are being scammed by a man offering 50 acres of privately-leased land.

Dozens of hunters were duped by a man promising leased land that was being shared by other hunters after being told it would not be, according to an article by by Marine Glisovic via Seven on Your Side.  This past hunting season, Daniel Smith called about a leased hunting land opportunity from an ad he found on Facebook and Craigslist after being told he would be able to hunt privately on 50 acres in London, Arkansas–however, Smith wasn’t alone.

“When I get up here a guy comes out here – when I’m putting out corn – and says, ‘I’m fixing to lease this and lock this gate’ and I’m like ‘well, I have already leased it’,” Smith explained. “So, he calls the guy on the phone and puts him on speaker phone and asks him about it and of course he hangs up and says we’re a liar. I showed the other guy the contract.”

And it was not just that other guy. Other hunters confirmed to 7OYS they too were duped.

“Nobody is going to lease 50 acres and have 50 other people lease with you,” said Smith. “You can’t even hunt it because you don’t know where anybody is at…so I can’t go out there and hunt and risk me getting shot or them getting shot.”

Smith said he paid $1,000 to lease the land in London where dozens of others were paying to hunt on.