There is nothing like going to a Secret Spot and finding a crowd. This is the story about Canyon Ferry during a weekend. The weekdays seem to have no pressure but… I needed to take my grandson CC and daughter Jessie for a day of fishing. 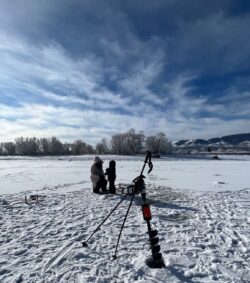 Everyone was set up in the same area. Most were using tip ups. We saw several folks running to their tip up flags, but never saw a fish come onto the ice. Everyone seemed to have the best advice. Last week I caught 1o here or if you go to deeper water, you will catch more fish. We never saw a fish hit the ice. 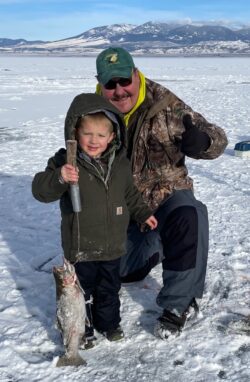 We had several hits, but the fish were hit and run. I needed to give my crew a 101 on how to keep the jig in the water and lightly jig after the fish’s first bite. My daughter had the touch. A few jiggety jigs and the rod doubled over.

Sharp hooks were important. I tuned up every jig to a fine tip. Light, more invisible fluorocarbon tippet also seemed to help. When we watched the neighboring tip up groups running to their flags, we never saw a fish on the ice. The trout would hit and run. Jigging after the initial bite was critical today. 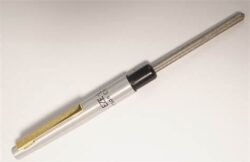 The water was shallow, but that is where the pigs seem to live in the winter. Our biggest trout was 23 inches. Jessie jigged up every strike. The meat hook helped to drag the pigs out of their holes. Thank goodness for reels with strong drags.

CC was the perfect Iceman. Every hole was checked, jigged, chummed, and cleaned of ice. He only cried when it was time to leave. Not bad for a 4-year-old! 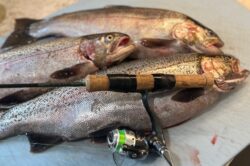 The fishing was good but not great. We broke off a fish, missed some bites, and failed to connect to a few others. Oh well, that’s why it’s called fishing. The best part of the fishing was the time spent together outdoors.