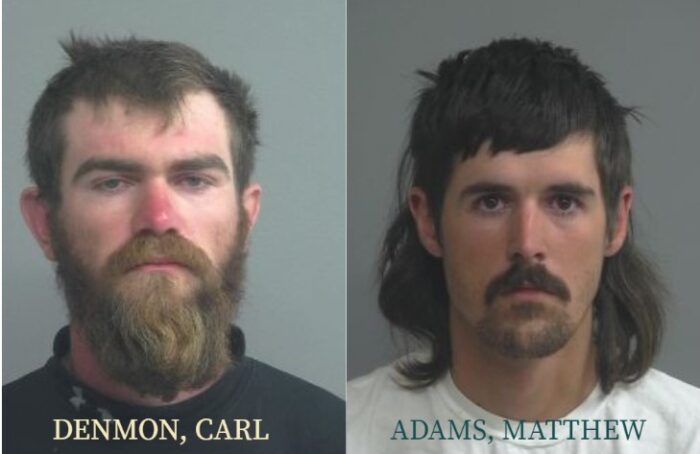 Texas men fined $31,000 for poaching in Wyoming
By Moosetrack Megan

GREEN RIVER, Wyoming – Matthew Adams (26) and Carl Denmon (25) of Texas, have pled guilty to numerous wildlife crimes, resulting in over $31,000 in fines and restitution. Each man was sentenced to and served 30 days in jail, and 11.5 months of unsupervised probation. The men also lost their hunting, fishing and trapping privileges for five years.  Because Wyoming is a member of the wildlife violator compact, the men are suspended from hunting, fishing and trapping in 48 states. Adams and Denmon also were made to surrender the firearms used in committing these crimes which included two .22LR rifles with homemade suppressors.

Denmon’s charges included:
-Wanton Destruction
-Accessory before/after the fact
-Taking a big game animal with an illegal caliber firearm
-Shooting outside legal hours
-Use of artificial light for hunting
-Use of a silencer or suppressor to take big game

Denmon and Adams were involved in a vehicle accident in the early morning hours of Oct. 16 and a concerned citizen called the Game and Fish after seeing blood and hair in the bed of their truck, and observing blood on the men’s clothing at the scene of the accident. In a subsequent investigation, Game Wardens learned that the men had killed three antelope in three separate locations in Sweetwater County between 1 a.m. and 4 a.m. Oct. 16, prior to their vehicle accident.
Each year, hundreds of animals are taken illegally in Wyoming, and without tips from concerned members of the public, many of these crimes would go undetected. The concerned citizen and another reporting party in this case each received a $750 reward for providing information that led to the convictions of Adams and Denmon.

Anyone who believes they have witnessed a wildlife crime can report it online, or by calling 1-877-WGFD-TIP, or Text: WGFD to 847-411. All reporting parties can choose to remain anonymous.